What's in a name?

At MPOW we've been having conversations about honorifics, about chosing to use Mx rather than Mr or Ms, or having students call us by our first or just our last names.  For example, Jane, Doe or Mx Doe rather than Ms Doe.  My father has never liked being called "Dr." (because he the useless kind of doctor, with a PhD not an MD - his words, not mine!) and felt "Professor" was a better mark of achievement.  That's not something I'll ever have the option of being called because I work in K-12, so the honorific is still supposed to be a question for me to resolve.

At previous schools I've gone by my first name, once at a Quaker school and once because the other librarian went by her first name and it just felt wrong to not mirror her.  But most schools want to Mr. or Ms (or Mrs/Miss) unless you are a Dr., in part to create a distinction between students and younger faculty, and in part because it's a tradition.

At one school I saw students outside class, on the weekends.  Several very quickly picked up that I preferred my first name at those times because I was off duty, but in school I was always Miss Lazygal.  It's also been a quasi-tradition to call teachers by their first names once you graduate from school, but some students never make that switch.  Just two weeks ago I saw a recent graduate who did make the change, which was great.  Then I posted on Facebook about September 11 and the former student I'd brought home that horrible day, who is now in her mid-30s, couldn't manage it.  Sigh,

Nicknames are also an issue for me.  Not diminutives, but actual nicknames.  If I don't know you, or you don't know me, stick with the name.  Don't presume that the nickname is appropriate, especially if you're in a different generation.  That's just too familiar. 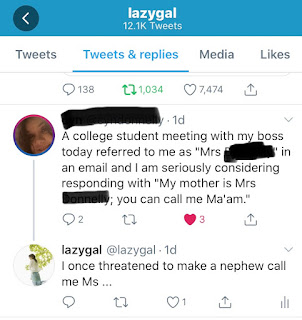 I wasn't kidding.
Posted by Lazygal at 10:53 No comments:

It's been twenty years, but it's as if it were yesterday.  Or earlier today.

And later on I remember
I've never been to the Memorial.  I never intend to go.  Neither does Thing One.  I pray that our health problems are not due to the "dust" from that day.  I pray this never happens again.
Posted by Lazygal at 11:03 No comments:

I've been blogging since 2004, sometimes heavily, sometimes not.  In the intervening 16 years I seem to have outlived quite a number of blogs that amused, inspired and challenged my thinking.  Apologies if any links in this blog's posts link to one of these (although you could always check the Wayback Machine)

Yes, this blog went on a bit of a diet.  Back in 2019, the Little Professor looked at 16 years of her blog and made some big changes.  I'd planned to do the same, but, well, COVID.  But now, with real time off, it was the perfect time to shed those excess posts.

Deleted: Links Galore and Digital Detritus posts, Memes/Quizzes, To Do Lists,  Imponderables, and many miscellaneous posts that ranted or pointed to things that no one (least of all me) cares about now, but possibly may have in the moment.
And after all that.... we ended up here:

It's kind of amazing how little (IMVHO) has staying power.
Posted by Lazygal at 09:51 3 comments: