Conversations with my father

Background: Despite being told by the Important University that no one should travel to come to graduation, my father was "invited" by his friend to attend her son's leaving law school this past week  Since it was extremely close to where I live, I got to see him and he got to see my new apartment.  We'd gone to lunch and had a nice walk and were sitting talking when he got up to go to the bathroom...

Dad: You don't use [brand of toilet paper] do you?

Dad: I like it.  It's quilted.  And Consumer Reports rates it highly.

Me: [Our brand] doesn't clog our pipes.

Dad: Oh, [other brand] is good about not doing that, too, according to Consumer Reports.

Me: I think ours has more sheets per roll.

Dad: Well, I wouldn't know about that.

Later, Thing One asked if he'd dreamt the conversation.  I only wished I had. 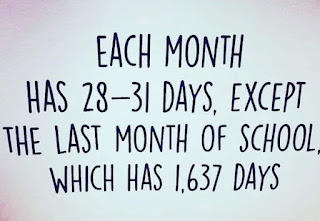 We're down to two weeks of classes, one Senior Week and a week of year-end meetings.  One month, and it'll feel like forever.

I know my colleagues and I know that like me they haven't had a real break since Winter Break 2019/20.  We've been revamping classes and learning new tech tools and spending hours and hours on Zoom and trying to provide our students with as normal an experience as possible during an incredibly abnormal time.

We didn't get Spring Break in 2020, because we were preparing for Life Under Lockdown.  Summer 2020?  I personally spent at least 5-6 hours/day doing professional development or working on the library's expanded digital collection or creating tutorials.  Winter and Spring Breaks were spent getting ready for students doing research and helping them (and teachers) learn more about digital research tools.  I'm exhausted.

Being the Lazygal I am, I've got a conference presentation to prepare, a day-long virtual workshop to attend and at least one virtual conference I'll be spending time watching.  All in June.  July, though?

It ain't over yet

As readers know, I spent a number of years in the recent past taking some Very Serious Drugs.  Of course those drugs had Very Serious Side Effects, like the occasional breathing issues and muscle loss.  Fun, right?

I've been off one of those drugs (Prednisone) for three years, and the other (CellCept) for just over a year.  But I'm still feeling the effects—when I walk at a normal speed wearing a mask, when I do a lot of work bent over (like cleaning low shelves, or packing), etc., it's sometimes difficult to breathe.  Things that I used to be able to do easily take a little more effort.  Apparently that might be the case for ever, or it might be that these drugs have a very long tail*.  Sigh.

*I refuse to believe it's because I'm getting older.  That couldn't possibly be it, right?

You don't believe me?

Over the years I've learned that the Things We All Know To Be True about cats ain't necessarily so, particularly when food is concerned.  For example...

Things Two and Four always took a dim view of cats being given human food, but sometimes it's wasn't actually so much giving as taking when I was protecting other food.
So when I mentioned that Greta had gone after my Sunday morning croissant, you'd think Thing One would have believed me.  But, well, no.  So, of course, I had to provide proof:

Then I discovered she liked shortbread cookies. And butter cookies. And gods help me if I had buttered toast.
She'd always been happy to share a little milk from cereal or morning yogurt, but Cyd and Francis were usually averse.  Until recently...  Of course there's video.  Which, to protect the guilty, I won't share unless necessary.  Don't believe me?
Posted by Lazygal at 07:08 No comments:

They don't love me any longer

Each division at MPOW has a parent association that works relatively separately from the other two divisions' parents.  Obviously, there is carry over as older and younger siblings go through the school, but each group arranges their own celebrations of both students and faculty.  In February the Upper School parents throw a really incredible breakfast and luncheon for us, complete with a gift and raffle tickets.  Later in the year, seniors have a raffle for various items to help raise money for Prom and their gift.  Why mention this?

My first year, I won a Trader Joe's gift card.

My second year, nothing.

My third year, I won a dining gift card from a group of Very Fancy restaurants.

My fifth year, I won a spa gift card.

Me?  Nothing.  Everyone in my department won something except me.  My assistant won something he hadn't even entered to win.  That's how much they didn't want me to win anything this year.

I better win something next year.  Or else.

When I was a much younger reader, reading books that were probably above my ken at that time, one of the tropes was the woman dying of consumption, reclining gracefully on her chaise longue, sipping laudanum. To my mind, that sounded so very romantic and glamourous, and I wanted to grow up to be just that way!

Here's the problem: as I later learned, this was all code for "dying of tuberculosis with an opium addition." No thanks.

Recently, the New York Time published an article about languishing (🔒) in which the author says

At first, I didn’t recognize the symptoms that we all had in common. Friends mentioned that they were having trouble concentrating. Colleagues reported that even with vaccines on the horizon, they weren’t excited about 2021. A family member was staying up late to watch “National Treasure” again even though she knows the movie by heart. And instead of bouncing out of bed at 6 a.m., I was lying there until 7, playing Words with Friends.

It wasn’t burnout — we still had energy. It wasn’t depression — we didn’t feel hopeless. We just felt somewhat joyless and aimless. It turns out there’s a name for that: languishing.

Languishing is a sense of stagnation and emptiness. It feels as if you’re muddling through your days, looking at your life through a foggy windshield. And it might be the dominant emotion of 2021.

Yes.  Exactly this.  There are things on my Never Ending To Do List that have been there since December 2019.  In part, I know that's because I lost all my vacation time since to working (or, more recently, Spring Break was spent moving and working).  Summer Vacation is rapidly approaching.  I have no intention of spending this as I did last summer, working virtually every day for at least five hours, trying to get things ready for next year.  I have some professional development planned, but my major goal is to perhaps move past "languishing" to something closer to "flourishing" (the apparent opposite... although I don't think that's quite right, but I'm too exhausted to come up with the correct antonym).

I have one work-related task to accomplish in July.  One.  And as far as I'm concerned, that will be it.  Everything else can wait until August.

Excuse me while I find a chaise longue to recline on, gracefully.