This whole "Dr. Seuss is cancelled" thing has gotten so far out of control it's not funny. 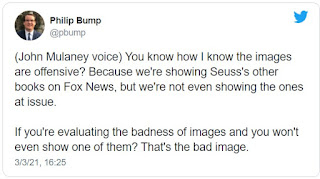 Apparently, Fox News has been going on about this for days, ignoring other, more important stories.

As a librarian, I've known that the Dr. Seuss books have been problematic 🔒for a while (yes, even Cat in the Hat).  Luckily, my students are at least nine years old, so it's not a collection development issue for me.

What's getting lost here is that the "canceller" is the actual publisher, on the advice of Seuss' estate.  And it's only six of his books.  Of those six, I know one (I think my copy is still in my father's basement, along with my Richard Scarry books [also racist/sexist], but they may have gone to my sister's children): And to Think That I Saw It on Mulberry Street. The other five?  Nope.  And I have a copy of The Tough Coughs as He Ploughs the Dough!  So it's not like I only know one or two of his books.

If a librarian who works with young readers doesn't have these six books on their shelves now, or removes them to add other, newer books, no one would say anything.  And it's incredibly unlikely that the blowhards on Fox had any idea they existed before now.  So please, let's just ignore the fuss and move on to other, far more important things.

Oh, and cancel culture?  This ain't that.  Unless you're trying to gin up anger over a nothingburger.