There was an op-ed in the WSJ this weekend that's gotten a lot of people's attention and drawn many comments and airtime.  Here's the beginning: 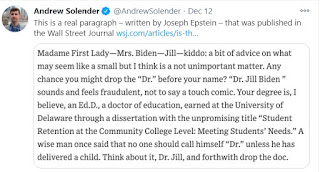 First of all, it's clear that the author just wants to stir things up (mission accomplished).
Second, does it really matter what honorific Jill Biden uses?
In schools it's now expected that we, faculty and students, share our pronouns.  The rationale is, in part, to help students feel safe sharing their identities with us and for them to feel accepted for who they are.  I read one article that suggests that perhaps the options have gotten a little out of hand, and at least at MPOW they aren't there... yet.
The next step is obviously honorifics.  At a recent faculty meeting we were encouraged to think about what honorific we were using and whether it was gendered (Ms., Mrs, Mr.) or not (Dr., Coach).  As a substitute for the gendered version, Mx. was recommended or we could just use our first names or last names.  Now, that last part just doesn't work for me.  Using my last name is a little too much like I'm in the army.  I've used my first name at a Quaker school and at the school previous to the one I worked in, but that's rarely the culture of the school.  And Mx.?  One of my staff suggested "Minx" (I think she was joking) but I'm just nixing Mx.  Using a gendered honorific is like sharing my pronouns - if I'm using Ms/Miss, then students can assume she/her/hers, right?
As for Dr. well... Some schools are incredibly proud of the number of faculty who have doctorates and insist on using Dr. whether or not the faculty member wants to.  My father has his PhD and always said that his degrees stood for "BullSh*t", "More sh*t", "Piled high and Deep" (no, he didn't make that all up).  Getting tenure and being a full professor was more important, so his preference was for Professor Lazygal's Dad.  And as an academic snob, he feels that anyone in secondary education who was not a medical doctor who used Dr. was simply someone who couldn't make it in a college/university job (note: I'm repeating his thoughts, not saying that I agree with them).
Me?  Well, I'll share my pronouns within my school (most of my non-academic friends won't understand) and I'll keep using a gendered pronoun.  And if we can move on from this silly season giving the op-ed more attention than it deserves, well, I'll be grateful.
Posted by Lazygal at 13:55