Life right now is... interesting.  There's good news, in that I'm feeling healthier than I have in a while.  And there's bad news, in that we have this COVID-19 thing that has led to death and an abrupt end to life as we've known it.  The paradox is that the social distancing of the latter has helped move the former in ways I don't think would have happened had I been going into that germ factor we call a school library and I call MPOW.

It's been over two years since I last did one of these posts and do I have links for you!  So without further ado...

Today's New York Times has this story: G.E., Which Traces Its Roots to Thomas Edison, Sells Its Lighting Business and a part of my past died.  Sunday mornings used to be filled with commercials like this one for BASF:
For years, I joked the BASF made adjectives and adverbs. I'm still not sure they don't.
And GE used to have customer support for everything, including MRIs and nuclear plants:
Can someone tell me: who will now be bringing good things to light?
Posted by Lazygal at 09:17 No comments: 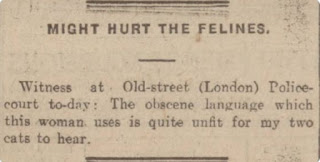 I'm old enough to remember the Automat.  My grandfather and father took me in NYC, and it was So Cool that the food just appeared behind the little window!  And I got to pay for it, just by putting coins in the slot! 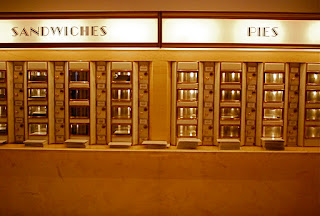 You can imagine how excited I was to see something similar when I visited Amsterdam: 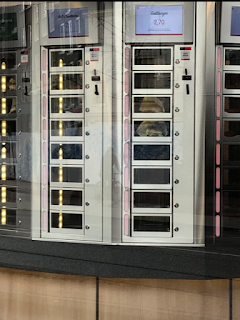 Eater just had an article saying that a dumpling shop was considering an automat-like model, given that we're in the Age of COVID.  Please — please! — more restaurants and bakeries, do this.  And not just because of COVID, but because it's So Cool.
Posted by Lazygal at 08:06 No comments:

You can't even get there...

The best part (or so my college BFFs and I thought) was the tag line:

We changed it slightly and would frequently say things (in a creepy voice) like, "Just when you thought it was safe to go to breakfast... you can't even get there"

This past February, which feels as though it was about as long ago as the early 80s, the parents association had it's annual appreciation brunch/lunch for the Upper School faculty.  One of the things they do is have -- in addition to amazing food -- is a raffle set up.  There are a number of tables with different prizes, and in front of each is a glass vase into which we put our tickets (each faculty member gets five).  My first year I won Trader Joes gift cards, and this year I won a $200 gift certificate to a local day spa.

Given my various health issues, I haven't been feeling spa-y but I knew that in March I'd be going off most of the medications (turns out I went off even more, but that's a whole other weird medical story) and maybe, just maybe, I'd be feeling up to it.  Reader, I am.

Just when I thought it was safe to get a facial and massage... I can't even get there.
Posted by Lazygal at 09:19 No comments:

I can relate to the fear

I guess it's good that Mt. Bookpile is still close to 300 and I have access to BPL's ebooks!
Posted by Lazygal at 08:57 No comments:

People over on Twitter are talking about the ways their mother was a fighter - like not insisting that their daughter's wear longer skirts because boys would get the wrong idea, etc.  Maybe it's me, but I get the feeling that those are younger women and these events happened relatively recently.

Me, I want to celebrate my mother the fighter back in the 70s.  The school district for SmallTown had two K-6 schools and then one K-3 and a 4-6 school in SmallVillage.  Even though we were just over the border of the Village, we were districted into those two schools. The 4-6 school was, to put it mildly, old and decrepit.

How old and decrepit?  My BFF K remembers getting burned by the hot piping in the basement music room.

I attended that school for two years, and then we moved to Switzerland for Daddy's First Sabbatical.  When we returned, it was up the very steep hill to the Junior High, big enough for all of the elementary school students and a much newer building.  But my sister, being five years behind me, was then in second grade and nearing the time when she, too, would be going to the old and decrepit 4-6 school.

Mom, and her friends, agitated and protested so much that they got that school closed down and my sister got to go to the newest of the K-6 schools, the one furthest away from our house.  K's younger sister, luckily, had moved (with K's family) to another city or she would have gone to the expanded K-3 school, even though they lived further from the Village boundaries.  A very famous Children's/Young Adult author's family bought K's house and that's the K-6 school she attended.

My mother was many things, including a fighter.  And I miss her.
Posted by Lazygal at 12:27 No comments:

In 2004 I wondered why this word was so popular.

And now, in 2020, I have to wonder whether I should learn the Russian word for defenestration.


"For a brief spell, we share a stage. Others are coming to kick us off.  But while you're here, write yourself a good part.  Act it well." He looks around the bar. "Act it well.  There's nothing else to say because there's nothing more to say.  Wisdom is platitudes gussied up."


David Mitchell, Utopia Avenue
Posted by Lazygal at 07:50 No comments:

Given the strangeness of the first third of the year, you'd think I'd either be way behind or way ahead of this year's goal.  Nope.  I'm right on track.  I am reading more eARCs than usual, probably because with conferences being cancelled it's the best way for publishers to get their books into pre-readers hands; the problem is that I can't then pass them along to teachers and students for a second opinion or selection.  Sigh.  Anyway, on with the list:

Many of my friends and colleagues are shocked and surprised that the majority of my mother's family are Republicans.  They are, but they're the exceedingly rare New England Republican (aka Rockefeller Republican) type, not the currently MAGA-crazed type.  My father's mother and father, on the other hand, were Republicans for the simple reason that FDR refused to allow the St. Louis to dock.  So that's the type of Republican I grew up with.

Thing One's family, on the other hand... The first time I met his youngest brother was at their father's wake.  In reminiscing about their father, K was approving of his father's ability to get a good deal on things, stating, "he could really Jew people down."  Yes.  In 1993.  I was angry and shocked, but it wasn't quite the time or place, plus he didn't know that there was a Jew standing right next to him.  Thing One made it clear later that knowing one's audience was probably a good idea.

Fast forward 27 years to Thursday night.  For some unknown reason, I've been added to his family text group - 11 people strong, but only a few text frequently.  And boy do they text!  I'll be sending an update to my staff or father, and see the unread text numbers increase.  When I wake up the next morning, I read the thread, which usually involves prayers for those working on the front lines of the COVID thing (two nurses, two police) and the teachers in the group, or something innocuous because these people are home and B.O.R.E.D.  Last month the threads ranged from 25 to 93 texts between the five major texters.

Then came Thursday.  In the middle of a group rant about government and opening business and growing marijuana and all that came a text, from K's even younger wife D, about a news story where the Satmars had gathered in Williamsburg to mourn a dead rabbit - a gathering that had to be dispersed because it was a little out of control in this age of social isolation.  Her comment? "The Jews with curls" but she wasn't being racist, it was just the truth.

Not racist?  Maybe.  But definitely anti-Semitic.  And despite the fact that this group knew that I was on the thread, and that Thing One was on the thread (and is half-Jewish on his father's side), no one pushed back.  No one said a word about maybe knowing your audience.  Or that there were other ways to talk about the Hasids (and frum Jews have payos but aren't Hasidic).  Or anything to show that they understood this was an unacceptable comment.

Thing One called the oldest of his sisters and yelled.  I yelled.  We're now (I hope) removed from the text group.  I'm still angry at these people I've known for over 30 years (some of them). Still shocked that in this day and age, someone who is from a background with a very easily applied derogative term would be that stupid in public.  It's just one of the many reasons I never want to see most of them ever again.