Despite being a scientist who brought home a Commodore PET in 197 , in many ways my father is strangely tech resistant.  Getting him to understand that a cell phone was necessary when my parents traveled was difficult, and forget having one that was modern or that was easy to retrieve messages.  Their plan had limited minutes and increasing them was not going to happen.  Not on his watch.  Towards the end of my mother's life we were able to convince him that everyone needed to be able to reach him and that a phone, and plan, that didn't even work within his house was simply a bad idea.

Shortly after her death, Dad had to come to Boston for another family member's funeral and between me and my sister, we cajoled him into getting an iPhone, and attached that to my family plan.  You know that phrase "be careful what you wish for?"  Well....

Yesterday, he was driving Miss Daisy (not her real name) to Wal-Mart and sitting in the parking lot.  And bored.  I'd sent this video to him, my sister and her daughter (we have a text group going):


My sister thought it was called a Zoomba, and, well, the conversation deteriorated from there: 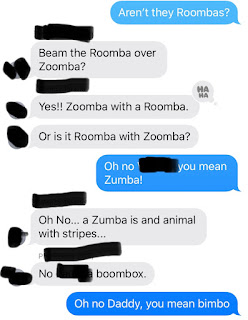 When we were children, sitting in the backseat of the car on long trips Dad would amuse us with a game he called "Oh no!" where a word would be misdefined and I would respond, "oh no! you mean [real word]" and he'd misdefine that.  I could get very creative with how I told him he was wrong, much to my young delight.  My sister rarely played but, well, she got into it yesterday.

Stay tuned for next week's episode of "Waiting for Daisy".
Posted by Lazygal at 11:47