Thing Two has a binary movie classification scheme that goes See / WAR (Wait And Rent - although that Rent might really be Stream).  In this day and age of social distancing and movie theatre closures, everything is "WARS" now.  The same closure applies to the live theatre, and the moment it became clear that was going to happen, Terry started to put out the following plea: 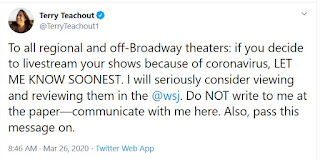 Then, today, he published a review of Syracuse Stage's production of Amadeus.  He watched the production at home, via his MacbookPro, which made me think about streaming in general.

Over the past few years, I've realized that very few movies I'd want to watch require the so-called Big Screen.  But the idea of watching on my laptop, a tablet or (even worse) my phone would lose far too much detail and honestly, who needs to squint that much?  But!  There is a screen that is "just right" - my television.  The bedroom tv can get Netflix, Acorn and Britbox which is perfect for most smaller fare.  However, if I'm streaming something like Amadeus (the stage version, not the movie) or the new National Theatre streams, I'll go to the living room's larger (40") screen.  There's even an HDMI cable I can use to mirror my laptop if the web-enabled stuff doesn't work.