Some people think I'm a pedant, but I'd wager that at times mkeagle gives me a run for my money.  Need proof? 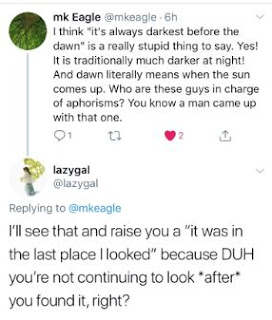 Why people say these things is beyond me.  And her, apparently.

Looking Backward and Forward (aka a Belated New Year's Meme)

I've cribbed from Philosophy Mom before, so why stop now?

Given that this past New Year's was the first anniversary of my mother's death, I wasn't really ready to do this.  But now, a few weeks later, it's time to close out 2019 and start 2020.  So here goes!

The obvious answer is "buried my mother", right?  And along with that goes the confronting of my mortality and the more real possibility that my father won't always be here (no, I wasn't thinking of him as immortal, but still...).

2. Did you keep your New Year's resolutions, and will you make more for next year?

No.  I did set a few intentions, but between dealing with family and health many of them didn't really come to fruition.  We'll see about this year, when getting physically healthy will be the primary goal.  Mental health will play a large part in that, as stress eating leads to all sorts of other issues...

3. Did anyone close to you get married?

Not that I'm aware of.  And clearly, if they did and I don't know, we're not that close, right?

4. Did anyone close to you get divorced?

Again, not as far as I'm aware.

5. Did anyone close to you give birth?

Physically close? Yes.  Several colleagues.  But emotionally close?  See my answers to 3 and 4.

6. Did anyone close to you die?

Say it with me: my mother.  And then there was my father's best friend (watching him deliver that eulogy was as difficult as the one he gave Mom).  And my cousin's husband.

7. What countries did you visit?

Canada and the Netherlands.

9. What was your biggest achievement of the year?

Surviving.  I know, that sounds trite.  But there was emotional stuff to deal with beyond my mother's death and just making it to work daily was a huge achievement.

10. What was your biggest failure?

There's one personal relationship that took a serious hit in late May.  Things are slightly better now, but it still causes me to feel guilt and stress.

11. Did you suffer illness or injury?

My eye was stable (has been for about two years now) for the year, so perhaps I could celebrate the opposite of injury.  And when you're on immunosuppressants and working in a school, illness is just a given.  Unlike 2017, with the Cough That Ate Winter Break, having a head cold for about two months doesn't seem like such a big deal.

12. What was the best thing you bought?

There wasn't anything I bought (beyond the trip to Amsterdam, so perhaps I'll claim that as the best purchase of 2019), but I got two great gifts at the end of the year.  The first was/is a Cuisinart Programmable Kettle.  It has totally revolutionized my tea drinking, and I drink a lot of tea!  The second was keeping with my ability to not buy my own television.  The old one dated from 2006 and was working just fine except... it was a CRT "dumb" tv, and while I could access Netflix and Acorn using Xfinity, BritBox wasn't available.  Now it is, which means I can watch EastEnders on time!

This might not be "behavior" but my father has done so well this year.  He was never the most social person, and it was a little worrisome that he was now alone in the house.  Silly me!  He's found people to spend time with (mostly friends of my mother), visited family in Colorado and Canada, and even participated in a professional conference.

14. Whose behavior made you appalled and depressed?

Most politicians, on both sides.  The Republicans because, well... and the Democrats because they're focusing on winning in 2020 by presenting plans that are largely unworkable (for example, do anyone really think that Medicaid-for-All will pass the House and Senate?  what are those politicians plans not just to propose change but to help it get through the legislative process???)

15. Where did most of your money go?
Travel, both personal and professional.  Increasing my ink, pen and tea collections.  Some clothing (how certain items all seem to need replacing at the same time is one of life's mysteries).

Being more sensitive to others despite being depressed and in mourning.

20. How did you spend Christmas?

I think of it as Jewmas, so the traditional Chinese meal (and a Netflix movie, not one in the theatre)

23. What was your favorite TV program?

Leaving aside the binge watching stuff, and a program I've watched since 1985... or another political (including PMQs)… The Great British Baking Show was a new favorite, and the revamped Q and A. Succession.

Wow.  Um... There were a bunch of five star books last year.  You want me to choose one??


25. What was your greatest musical discovery?

None.  I stuck with tried-and-true.   Yeah, I know.  Borrrrring.

26. What was your favorite film of the year?

Didn't make it to the Big Screen, but via Netflix I watched The Post and Tea with the Dames and would highly recommend them to anyone.

27. What was your favorite live performance?

Two very different ones: Mark Morris Company and Eddie Izzard.  Both came just when I needed them.

Time to really think about my life going forward.  A great pen-and-ink box (thanks to my father).

Answers to some questions regarding a couple of people at work.  More time with my mother.

30. What did you do on your birthday, and how old were you?

Nothing beyond going out for dinner.  With everything going on, celebrating wasn't something I wanted to do.  As for age, let's just say I'm "a lady of a certain age".

31. What one thing would have made your year immeasurably more satisfying?

Being able to retire or work part-time (don't get me wrong, I love my work, but I need a break - and not one in the summer, when the heat saps all my energy)

32. How would you describe your personal fashion concept in 2019?

The Herd.  Friends.  The Things.

35. What political issue stirred you the most?

There's no way to describe the angst and anger at the idiocy of all political figures.

Mom. HS friends that gathered when I wasn't able to make it.

37. Who was the best new person you met?

Beyond new people at work, I'd say my sister's daughter (whom I'd met a few times before, but this year I feel as though I've really gotten to know and like her).

It was more of a reminder: people don't always tell you how they feel about you until it's too late.

39. What was your favorite moment of the year?
One evening spent with good friends and good food and drink.

40. What was your least favorite moment of the year?

The day of my mother's funeral and the day of her internment.

41. If you could go back in time to any moment of 2019 and change something, what would it be?

In one case, I'm not sure it's a moment but I'd take better care of one relationship.  In the other, I wouldn't come in to work when I wasn't really able to be 100% there and said something really stupid.

A trip to Lisbon.  Moving to a new apartment,  Possibly buying a new car.  Keeping things together at work and home better than I managed to do last year.  Working on my physical and emotional health.
Posted by Lazygal at 09:31 No comments:

... but Michael was too tired to fall asleep.  He listened to his Walkman.  Laurie Anderson sang, "O Superman," a chant of such profundity and nonsense that washed over him like the shower, a nice, hot shower...

"Hi, I'm not home right now," Laurie Anderson said, "but if you want to leave a message, just start talking at the sound of the tone ha ha ha ha ha ha..." Michael had put this part of "O Superman" on their answering machine.

One night, when they got back from dinner, Daphne played back their messages and they heard, in her mother's nervous voice, the next line of the song, "Hello. It's your mother. Are you there?"

(honestly, who didn't do this back in the day?)

Another year with 305 books read, just barely going over the goal of 300 for the year.  Reviews are over at the reading blog, but again some didn't get reviewed because they were either picture books I "read" for MPOW's Mock Caldecott, while others fell into the "you can't talk about this" category for the Book Award Committee.