It's been something of a difficult year for my father: first my mother, then his best friend died.  This was a man who not only gave my father a professional home but also became a good friend to my family.  Early on, we would all go for walks or drives to the best pizza in the area.  Much later, he checked in on my grandmother when she was in the nursing home and my parents were out of the country.  Of course I had to go to his memorial last weekend, held at his (and his father's, and his brother's, his son's and my) alma mater... and where he and my father taught together for decades.

Like most Small Liberal Arts Colleges, mine has been engaged in building and expanding the campus.  With the exception of the original 1800s quad, I'm not sure I'd have found my way around thanks to all the changes.  Shortly before I started, the school went co-ed.  At that time, the fraternities ruled the school's social life - and the addition of young women didn't change things.  Except at one, an independent, that allowed women to join.  Many of my friends did, as did I.  We had less money than the nationals, but we threw the best parties, where the emphasis was on dancing and enjoying rather than drinking (flipped, obvs, at the other houses).  Years later, the school bought all the fraternity houses and converted them into dorms.  Our house was situated at the entrance to one side of campus, and rather than become a dorm it became the new Student Center.

Last weekend, we parked and were walking to the bookstore, passing buildings that hadn't existed 30+ years ago.  The House I'd known and loved seemed to be a shell, with only the facade retained.  We went in to the bookstore, and at the entrance I turned right, to where the House had been.  And this is what I saw: 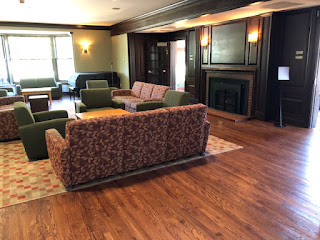 Some things haven't changed that much.  Ok, the couches are in better shape, the floor far less scuffed but if I closed my eyes I could hear Thing Three talking, or Thing Two DJ-ing, or any of the others playing Trivial Pursuit or planning the next party or figuring out the theatre production schedule (most of us were theatre people).  Dinner would be served just down the hall.

Turning left, though, it was a whole new world.  As they say, plus ça change, plus c'est la même chose.