Can't even get this right! 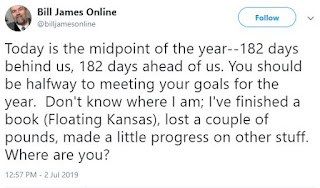 My response was "behind".  And clearly, since I'm posting this on Day 183 of the year, nothing's changed in 24 hours.  Still very, very behind.


Note: when queried, I confessed to being "Beto behind" as opposed to "Bernie behind" or "Bill de Blasio behind" - in other words, there's some hope of catching up.


How did this happen?  This past academic year has been rough, to be honest.  Between my mother's death, work issues and health issues, things have slipped a little out of control.  Taking what a friend referred to as a cocktail of drugs to control my eye problems has had a seriously negative effect on my ability to do anything beyond work, and that was before realizing that my mother's health was in such serious decline that the end wasn't going to be years but months.


Disclaimer: my grief is no where near my father's level (he's lost his two best friends, one (Mom) he'd been with for over 60 years, and a colleague he'd worked/researched/collaborated and taken an painting class with for nearly 50 years; and my eye issues are nothing compared to what others, including Mrs. T and two good friends from high school are battling.

As I said, there's hope.  My Massive Summer To Do List™ is premised on the fact that I can maybe get through all of it if I put in 2-3 hours of work/day before reading (yes, I'm behind on my 2019 reading goal, too).