The past month has been overwhelming for me in many ways.  Work has been incredibly busy, there's some family stuff going on that is just adding to the sadness and angst of the past few months, and then there are two other things that have made me sad/stressed (strassed?).

When I lived in Switzerland in 1973/4 we got our news from The International Herald Tribune, which was a co-production of the Washington Post and The New York Times.  This was perfect for staying abreast of what was going on with Watergate and I would occasionally spend my allowance on a copy (when my parents weren't buying one).  Yes, I was a bit of a geek.  Ok, I still am.

So when this year's Spring Break included a trip to Amsterdam (the one in Europe, not the one in Central NY) at the same time that there were going to be two big developments, the Manafort sentencing and Brexit votes, I was excited to see what the IHT would say.  But there's no IHT, it went defunct in 2013.  But there is an international edition of the NYT so that's just as good, right?

Nope.  Here's the front page of the NYT the day Manafort was sentenced and the day of the big Brexit vote: 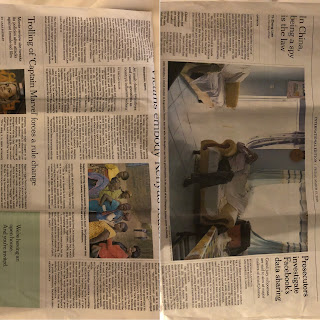 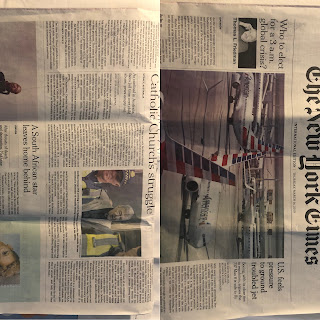 The Boeing MAX pane being grounded and Facebook's problems?  WHAT????  I have a friend who works for this edition of the Times, and I do understand the business model.  But still... these are two fairly major news stories and the NYT totally failed.

Then, last week, the fire at Notre Dame.  During my several trips to Paris it's been a required destination; when I was in Paris for eight weeks I went to Sunday Vespers weekly, and when I was there in 2012 I lit a candle for my uncle (who had died only a day before).  So there was that sense of loss, that a "friend" wasn't going to be there when I next visited.  And totally self-centeredly there was also a feeling that I'd seen this before, in 2007, when the library I worked in burned down.  Now, I'm not comparing the loss of a cultural/religious landmark like Notre Dame to a school library, but the images of the firemen with their hoses and the flames were similar enough to make me want to crawl under all my covers and never come out.   The good news is that as with my library, Notre Dame will rebuild.