A Tale of Two Christmas Eves

Once upon a time (back in 2001) I lived in Brooklyn. It was Winter Break and I was sick. Not just sick: I had bronchitis. Even worse, Thing One was sick with a cold (fever, cough, etc.). We were pathetic.

If you left our apartment and turned either left of right and walked about a block and a half there was a Chinese take out. One had better ribs and mu shu while the other had better soup and wontons. On this Christmas Eve, we didn’t care who was open, we just wanted soup.

I lost the coin toss and bundled up to find the soup. I went in one direction, got half a block, and realized that the shop was closed. Turned around, walked towards the other... oops. That one was closed as well. Thus began a hunt for an open Chinese take out, a hunt that lasted nearly an hour as one after another of the shops in our neighborhood (there were a lot) failed me.

I did finally find some, rushed home, ate and miserably curled up in bed. The next day, Thing One went out and was back with more soup in less than 15 minutes.

This year, I’m sick with a cold. It’s been waxing and waning since just before Thanksgiving. And Thing One is on day three of a fever. It’s a new city, with far fewer Chinese take out places. So I’m heading out (in a car) in the afternoon to get tonight’s soup.

My family's relationship with ice cream goes way back.  My mother's parents started married life as owners of an ice cream shop in Salem (MA), but by the time I came along my grandfather was the comptroller for a chain of department stores founded by his father-in-law, and my grandmother had died 12 years earlier.  Ice cream, when we lived in Boston and later visited, meant Brigham's.  With jimmies.

Mom's favorites back then were rum raisin and butter pecan, but I stuck with "white" ice cream (note: it wasn't vanilla, because there was the pale yellow/cream version that was French vanilla and I just wanted the white version - none of the other colors appealed) Even today, I prefer vanilla but have graduated to allowing mix-ins like chocolate covered almonds, cookies, chocolate chips, etc. And, of course, jimmies,  Imagine how happy I was to move back home to find Brigham's Vanilla with Jimmies! 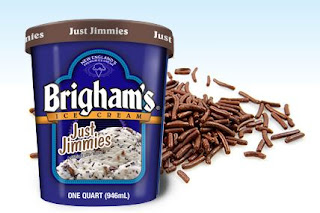 When we moved to SmallVillage in 1969, my father bought a hand-crank ice cream maker and for years one Thanksgiving tradition was to make homemade ice cream using snow from our background as a cooling agent.  Licking the dasher was a reward for helping.  More recently they've made ice cream at home using the stand mixer given to them as a wedding present. Despite being fervently lo-cal/no-fat, using heavy cream for this was an absolute must.

My uncle, for health reasons, lived in dry places like LA and Addis Ababa, finally moving his family to Jerusalem in the early 1970s.  Israel is not known for its ice cream, and one of his great pleasures when visiting my mother was taste testing various brands and flavors of ice cream.  Towards the last years of his life, on his Anchises blog, wrote about dying, ice cream and what would constitute a lesser quality of life.

Recently, my mother's health has seriously declined.  There's a gasping thing, Meige syndrome (or some other form of oromandibular dystonia) that makes it difficult for her to eat.  One of her doctors thought perhaps cold food would help - so my father brought in ice cream.  Not homemade, but store bought.  In her favorite flavors.  And it's working!  She went from unable to eat to eating 8oz/meal of high fat ice cream.

Just as well one of their favorite musicals is She Loves Me, which includes this number:

(This was about to be published when the situation changed.  I'm still posting this, but with a heavier heart.)

Culture Vulturing in a void

As with previous schools, MPOW has various endowed funds to bring speakers and artists to campus.  There's one fund for French cultural experiences and this year we were lucky to have Coeur de Pirate perform.

You've never heard of them?  Well, they're huge in la monde francophone:


Nominated for Francophone Album of the Year at the 2009 Juno Awards, Cœur de Pirate was released in France in 2009 in association with Universal Music. It became a big hit there, reaching the Top Ten of the French albums chart for several weeks in summer 2009 and spawning the Top Five hit single "Comme des Enfants." The French version of Cœur de Pirate features a duet with Nouvelle Star season five winner Julien Doré on the song "Pour un Infidèle," whereas the Canadian version features a duet with Jimmy Hunt. The French version of the song topped the singles chart in France... [in 2011] Cœur de Pirate's second album, Blonde, saw release and reached the Top Five in France, Canada, and Belgium. (via)

The song Oublie-moi was also released as Carry On in English:

Anyway... I've seen them twice before.  So yes, I was excited.

But the students?  Not quite so much.  They didn't know the music.  They didn't know the group.  And when Coeur de Pirate played, there was polite applause (granted, it got warmer and more excited as the evening went on) but no one got up to dance or any of the other things that usually happen at concerts.  For the band, it must have been so strange to have such a lack of response when the big hits were played.  Imagine if the Beatles, four years into Beatlemania, didn't get a response when they launched into Love Me Do or Help! (or if Taylor Swift didn't get a response to any of her hits).