Culture Vulturing at an awkward moment 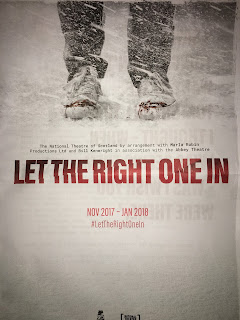 Because when you're in Dublin, and the Abbey Theatre has a production, you go, right?  And so, I did.  This production, Let The Right One In, is based on the Swedish movie (which was based on a novel) and was just opening when we saw it, although it was originally seen on stage in London, New York and other places since 2013.  I mention this to give some context: this isn't a new production (except in Dublin) nor is the subject matter new.  I also mention this to tell you that there are no spoilers here because see above.

Without getting into the performances or the technical aspects (although I certainly could), there was one moment that took me aback.  Those who know me know I love me some vampires.  And I know that Eli is a vampire.  And that Haken is not her father but an old man in love with Eli, an old man who probably fell in love with her and agreed to be her protector (thrall?), helping her to cover up her killings and move from town to town when much younger.  But Haken is at the end of his life, while Eli is still "young" - and his despair at this realization and that Eli might be looking for someone new/younger is palpable.  So when Eli offers to remove her shirt, or to sleep with Haken, I know that this is actually a very old being offering comfort to a younger man but... but... the visual is of a young girl and a much older man.

Had I seen this when it was on stage in New York (2015) or London (2014) or even two months ago, that moment wouldn't have taken me aback.  But in this post-Weinstein, post-Spacey, post-Roy Moore moment?  It did.  There have been a number of articles about how we come to grips with the artistic works of people (like Woody Allen or Richard Wagner) when we have contempt for the person.  Clearly this moment isn't about that, but it did make me wonder: how will the vampire story fare, on or off screen, given our moment of #metoo?
Posted by Lazygal at 09:01 No comments: