Usually I hear that some one has heard of my incredible probity and compassion and is interested in helping me help others, because some foreign person (who may or may not share my last name) needs help accessing the millions of dollars they've inherited (or won).  And, of course, I ignore them because... I don't need to finish that, right? 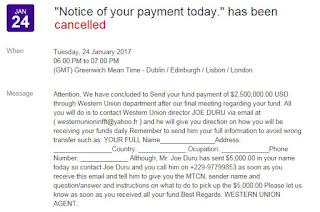 Granted, I've been a tad forgetful recently, but I'm reasonably certain that arranging this transfer (not to mention the meeting when this was all set up) would be something I'd remember.


I do wonder, however, how many people actually get caught by this stuff.  I mean, we've been getting these messages and pleas for almost as long as email has existed - is anyone taken in?  or do the spammers live in eternal hope that one person, somewhere...
Posted by Lazygal at 12:53 No comments:

Not Guilty, Your Honor

Terry recently posted a flashback to a post he wrote about guilty pleasures.  Thing Two once confessed that Gilmore Girls was a guilty pleasure.  Here's my problem: the word "guilty".

Perhaps when I was younger, I had guilty pleasures.  But now, as a mid-century adult?  Nope.  If it's a pleasure, I'm not going to feel guilt.

There are definite times when guilt invades my life.  For example, when I recognize I could have been kinder to someone in pain.  Or when I don't take action (through laziness, usually, or being too rushed to do it now and then forgetting) that would help someone.  There are fleeting flashes when I get one of those pleading letters or emails (or, now FB posts) asking for help that I could give, when I know it's a worthy cause but not my cause.  That's it.

I'm starting the new year right: decluttering and organizing while watching the Hoarders marathon.  So inspiring!  Here's some digital detritus (my new name for the Links Galore posts) for your pleasure:
(more to follow - my goal is Feedbin Zero and Twitter Saves Zero by MLK Weekend)
Posted by Lazygal at 06:16 No comments:

Totally stolen from Philosophy Mom!  And what better way to recap / get ready for a better blogging 2017?
1. What did you do in 2016 that you’d never done before?
Opening prompt... let's focus on something good (the bad will come later!).  In 2016 I went to several tasting dinners, which I have done before but this time one of those was a whiskey dinner and the other saki.  Whiskey hasn't been something I've ever enjoyed before, but the combination of people at the table and the different tastes made for quite the nice evening (and by "nice" I don't mean "drunken" I mean genuinely nice).
2. Did you keep your New Year’s resolutions, and will you make more for next year?
I did manage to lose some weight, and tried to be more organized.  I usually don't do resolutions, but my intention is to be more composed, more deliberate in the new year.  That includes my food intake (no more eating what I know only looks good but doesn't taste the way I want it to), activity (get back into shape - time's a-ticking!) and professionally.
3. Did anyone close to you get married?
Not this year.  There were two engagements announced, one wedding will be in April and the other next January.
4. Did anyone close to you give birth?
Depends on how you define "close".  Thing One's family has great-aunted me twice in the past month with a third on the way.  For those keeping track, that's 10 greats.  Probably many more on the way.
5. Did anyone close to you die?
Yes.  If by "anyone" you mean "any living being": 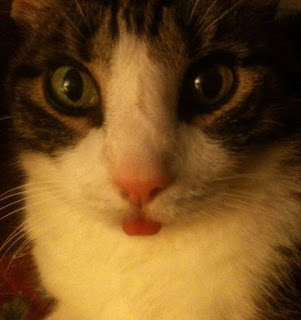 We knew he was getting old, and quite possibly blind.  But I had hoped he'd somehow make it a few more years (yes, 17 1/2 is old for a cat, but still...).  On Thanksgiving, we said goodbye and snuggled for the last time.  The remaining three members of The Herd are still, one month later, figuring out the new normal.  And since they're 8 and 6 years old, with luck we'll have many years for them to figure it out.
6. What countries did you visit?
Only one trip to Montreal this year.  Because work.  But next year... We'll see.
7. What would you like to have in 2017 that you lacked in 2016?
Honestly, I don't think I lacked much in 2016, but getting together with friends more than I did would be nice.
8. What was your biggest achievement of the year?
It's got to be a tie between the overhaul of the library collection (25,000 books weeded and another 25,000 moved, mostly over the summer) and hiring three great members of the library team.  Both took a lot of work, physical in the case of the former and mental in the case of the latter, but Academic Year 2017 has been going really well as a result!
9. What was your biggest failure?
I'm on the introvert side of the spectrum and not breaking out of that more, even via email or snail mail, was a definite failure.  Part of the composed intention is to literally compose more (blog posts, letters, emails).
10. Did you suffer illness or injury?
Oh yes.  Almost a month ago I woke up with something a little off in my eye.  Turns out I have optic neuritis, aka an inflamed optic nerve.  Major steroid infusions helped, and now it's just a question of time (as in possibly months to a year) before we're back to what the doctor calls "baseline".  The good news is that it's only affected one eye, so my reading hasn't suffered.
11. What was the best thing you bought?
My new scarf (no photo available now, but perhaps later...).  It was my reward for spending all summer working 7-11:30 in a non-airconditioned, unventilated library doing incredibly physical labor.
12. Whose behavior merited celebration?
Thing One, duh.  He's been a rock throughout the optic nerve adventure.  Plus giving in to my whims.  What's not to celebrate?
13. Whose behavior made you appalled and depressed?
Several of Thing One's family who truly support the awful (racist, misogynist, xenophobic) side of our incoming President.  If I had any luck I wouldn't have to see them until 2018, but with three newborns and a major Birthday/Anniversary Celebration this year, that's doubtful.
14. Where did most of your money go?
The Herd.  We were at the vets pretty much every week over the summer, and at least once a month after.  One had a growth on her chin, another a tummy infection (the spaying scar - don't ask, but she looks like she has a human belly button, which is not normal!), Mallory's illness, and one really, really doesn't like vet visits.
15. What did you get really, really, really excited about?
Really, nothing.  This seems to have been a stress-filled, work-filled year.  So perhaps "starting 2017" is the correct answer?
16. Compared to this time last year, are you:
17. What do you wish you'd done more of?
Taken advantage of living in my Birthtown.  There's so much going on, and great day trips to be taken.  Again, next year...

18. What do you wish you'd done less of?
Spent time at the vet. Stress eating.  Played backgammon and cribbage on my phone, rather than getting caught up with professional stuff and/or reading magazines while watching tv.  I may have read 345 books, but I have nearly a year's worth of The Economist and Atlantic Monthly in an accusatory pile.
19. How did you spend Christmas?
Almost the same way as usual: opening presents at breakfast, then having the Traditional Chinese Dinner.  No movie this year (nothing at the times we wanted, plus my eye problem).
20. How did you bring in the New Year?
Reading.  Sleeping.  There will be a nice NYD brunch today, though.
21. Did you fall in love?
No.
22. What was your favorite TV program?
Hmmm... there were several I really liked: 19-2.  People of Earth.  Happy Valley. Winter. Those are new ones I've discovered.
23. What was the best book you read?
Because of the Book Award, I can't really talk about my real favorites.  I'd really have to think about YA books I loved; sadly, none stood out.
24. What was your greatest musical discovery?
I was going to say "none" but then I remembered (as if I could forget!): Bruno Mars.  I got to see him play Mohegan Sun, in the most amazing seats, as part of a weekend with some HS friends.
25. What was your favorite film of this year?
Didn't really see many movies this year.  In part because I don't see the point in spending all that money for something ultimately "meh" (if I could do that with food I know won't taste as good as it looks like it wants to taste, I'd be so much thinner by now!).  And in part because so few really benefit from the Big Screen so I'm willing to wait for Netflix.
26. What was your favorite live performance?
PNB's performance at Jacob's Pillow.
27. What did you want and get?
My "reward" scarf.  A great team to work with.

28. What did you want and not get?
Good health. A summer travel experience.
29. What did you do on your birthday, and how old were you?
For the third year in a row, my birthday (number 53) was also a snow day at MPOW.  This year that won't happen because its on a Sunday.  But maybe either Friday or Monday will be one!  Hope, as they say...

30. What one thing would have made your year immeasurably more satisfying?
Selling my house.
31. How would you describe your personal fashion concept in 2016?
Not quite "capsule wardrobe" but I've settled on green/grey as my colors and am paring down my wardrobe to the pieces I really like and look good in.
32. What kept you sane?
How presumptuous: am I sane?  Seriously, though... until Thanksgiving, I'd say it was my early morning and bedtime cuddle with Mallory.  There really is something about the purr that lowers blood pressure, eases stress and makes you feel loved.  After Thanksgiving, Thing One (who doesn't purr, or fit in my arms as comfortably).

33. Which celebrity/public figure did you fancy the most?
None.  Is that elitist of me?
34. What political issue stirred you the most?
Not the election (although that did!) as much as watching otherwise intelligent people embrace the really awful things that were bring promoted by the winning candidate.  And watching serious fault lines develop among colleagues and students who weren't on the same side of that issue (I really do understand not wanting to vote for Hillary - I didn't! - but The Donald?  His ideas are so vile.  And those who think he's ok are just beyond my comprehension).
35. Whom did you miss?
No one.  I spent more time with people I like this year.  I missed not spending more time with them.  Does that count?
36. Who was the best new person you met?
One of my new team members.  A professional colleague who I finally met in person.  The other members of the Book Award Committee.
37. Tell us a valuable life lesson you learned in 2016.
I'm getting older.  Watching my health is important.
38. What was your favorite moment of the year?
Two: attending one of the best professional development sessions I've ever attended, back at my alma mater (which just made it all the sweeter). And the weekend spent with some HS friends.
39. What was your least favorite moment of the year?
3:45pm, Thanksgiving Day. Saying goodbye to my Mallory.
40. If you could go back in time to any moment of 2016 and change something, what would it be?
Nothing.  I mean, there are things I didn't love, that I would love to change, but ultimately I couldn't change my eye issue or keep Mallory alive.  So... nothing.
41. What are your plans for 2017?