Looking for a good book?

If you got gift certificates to spend and want to catch up on your reading, here are some great lists:

325 Books Read.  Not as good as last year, but then, this year included a Big Life Change that took away most of my reading time in September/October.  Going by my supposed 2413 books left to read I've been trying to be better about DNF'ing books that just don't hold up. For lists and review links, go here, here, here and here (the totals on the review blog won't match these because I don't add the books I read for professional review or for a fiction award).

Looking for additional lists?  Stay tuned - that post's right around the corner.
Posted by Lazygal at 10:57 No comments:

The history you know...

On Christmas Eve Day and Christmas Day I actually went to the movies!  What'd I see? Saving Mr. Banks (with a work friend) and The Wolf of Wall Street (with Thing One).  Only later did I realize that both were fictionalized accounts of real events, with white- or black-washing depending on the character and/or studio motivation.  What made a real difference for me was that I knew Wall Street and the backstory to the latter movie, while I'd only read and loved Mary Poppins (the book; I liked the movie, despite That Accent, and hated the Broadway show).

Is the movie profane? Of course.  But then, so was much of what went on on Wall Street at that time.  And as movies go, In Bruges is worse vis-a-vis the ratio of swearing to other language. Is it accurate? Well... not so much.  Maybe that's what kept me interested: playing spot-the-error.  Errors like, the culture at L.F. Rothschild wouldn't have allowed a character like McConaughey's to be as flamboyant as it was.  Like, the way the characters dressed wasn't in keeping with the times.  Like, the idea that selling penny stocks was new and radical (Michael Milken, anyone? plus I know "junk" traders who were doing legitimate trades in the '90s).  And let's be honest, the firm was never a Wall Street firm, it was based on the Island.  On our way out, there were some 20somethings cranky because the cast wasn't racially mixed - as a private firm, Stratton had no obligation to follow EEOC guidelines and in that regard, at least, it was very accurate.  Thing One commented later that the swearing may have been over the top, but it did downplay the drug use (believe it or not!). And the movie did bring back memories of my time working at an investment bank: the night before Black Monday I'd hung out with Thing Three and was so tired the next day that I didn't pay attention to any news when I got home - it wasn't until the next day the import of the losses from Monday became apparent.

As for "Mr. Banks", now I want to re-read the books and learn more about P.L. Travers.  What little I know (thanks to posts like these) shows a woman far more interesting than the one portrayed in the movie.  And here's a fun fact: she was at Radcliffe when my dad was teaching at Harvard and attended things my parents attended (Mom being a 'Cliffie didn't hurt, either).  The whitewashing of Disney himself bothered me somewhat. We know the man smoked, but these days you're not allowed to smoke - even to make things historically accurate - unless you're the villain (see Jonah Hill in the previous movie).  At the end, hearing Travers' voice on the audio recording from her work sessions in the Disney studios was fascinating.  Pity the script wasn't verbatim.

Who knows when I'll next make it into an actual movie theatre - my tolerance for the high prices and low ROI keeps sinking.  Neither movie I saw was a Must See On the Big Screen movie (few are).  There is something to be said for the group experience, hearing others chuckle and gasp along with you; on the other hand, there's something to be said for not hearing others' cell phones go off at a critical moment and not seeing the glow from their screens as they text someone.

Every Meeting has its own quirks and personality (just like ever congregation everywhere does), so I was prepared for something different yesterday.  First of all, this is a newer building, newer congregation and a larger one - not bad things, just a huge change from my average of 5 other people at worship in a building dating to 1831 (without heat or running water or electricity inside).  on the other hand, I started attending in Brooklyn which is bigger still!

What I didn't expect, and was take aback by, was the lack of Friendship I heard from one member(? could have been an attendee).  A gentleman had a Message and rose to speak.  It was a little long, a little rambling and at a few points he paused.  After the second pause my eye was caught by a woman's hand moving, in what I thought was a "move it along" motion, but I had to be mistaken, right?  Then he used the word "brotherhood" and I heard this woman hiss "sisterhood"... huh?  And at the next pause, another hiss, this time "sit down". Double HUH?? with a side of WTF????

It would be wrong to let this one incident cloud my judgement about this Meeting.  It took several months before I decided that the Meeting near the Cold Cottage was not the home for me, after all.  But we're definitely off to a rocky start.
Posted by Lazygal at 14:17 No comments:

Last night at dinner, not exactly sure how this came up but... well... I was wondering what happened to Vladimir Posner?  It was like video killed the radio star, and glasnost/the wall coming down killed Pozner.

Ready to face the holidays

It's not that I don't love my family, but the opportunity to get away?  Yes, please.  And when it's the next best thing to going overseas (aka Montreal)?  Even better.  But before I went, there was a book-filled conference in Boston to attend.  In both cities there were good friends to hang out and great food to eat. Admit it, you're envious: 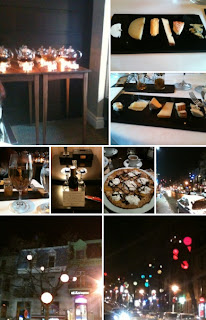 (those glowing globes are the holiday street decorations on "our" street in Montreal - cool, eh?)

Highly recommended:
Tea at L'Espalier (try the Gloucester Street Blend tea)
Citizen Public House and Oyster Bar (and for the brave, you can try a pickleback)
Stash Cafe (get the Menu du Debutant)
Taverne Dominion (go on Thursday for the duck leg confit, and don't forget to try their special tonic)

Over the past 27 years it's a rare night I've spent alone in bed. And while I adore my bedmate(s), over the past few months it's become clear that something has to change. I should be the dominant partner, not the submissive one - the one forced into holding positions for hours, hit if I move before I'm allowed.

When I moved into the Cold Cottage from Hell, my big boy became a wonderful teddy cat and the little guy would curl up in the crook of my knees. Together we'd huddle against the lack of heat in the bedroom, keeping each other warm and safe throughout the winter. Then we moved and things got better, but the minute winter arrived we'd all curl up together. Slowly a pattern arose: get into bed, lie on my right side and have my left arm/hand be used as a pillow by Bogie, and after an hour or so we'd all find our own comfortable positions and sleep soundly - then after breakfast, Mallory would take over and we'd nap a little.

This past May Bogie joined our other mantlecats and Mallory became the Alpha Cat in the house and in bed. During the workday, or when I'm at home but not in bed, Mallory is purrfectly capable of getting under the covers on his own and getting back out. Cyd, Francis and Greta can do that too. But the minute I get into bed he manages to lose that ability and uses his hands hitting me as a sort of remote control cover opener. If that doesn't work, he'll nip me. At night, if I don't have my hands just so for use as a pillow, I get hit again! And people wonder why I don't get a good night's sleep...

If only it weren't just about my bed: 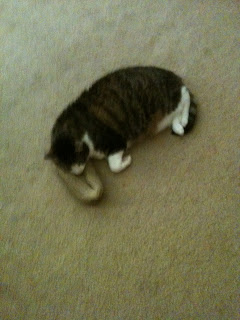 (yeah, he's commandeered my slippers... but that's a gripe for next time)
Posted by Lazygal at 13:44 No comments: