A hole in my life

Last Thursday, Bogie joined Lulu, Marlowe, Pravda and Howard, leaving behind me, Thing One, Mallory, Greta, Francis and Cyd.  There's a hole in our lives that will never be filled.

That weekend, Thing One and I headed north for Number One Nephew's wedding (5 weddings down, 13 to go... in that generation anyway) and then headed over to SmallTown to see my parents.  While we were there, I saw a man that I've known since July, 1969 when we moved to SmallTown, but haven't seen since sometime during our time together at SmallCollege (where both his and my father taught).

It started me thinking of Thing Three, and the hole he's left in my life, too.  "Back when" (aka our college years and beyond) we were close.  Late night talks, letters/cards during vacation, hanging out, etc. - you know, all that normal college friends stuff. Lucky for both of us, we headed to NYC after college and continued the fun at movies, Off-Broadway shows, homecooked dinners and other events.  Then he left for the far reaches of Pennsylvania, and then met and married someone and, well. there was a hole in my life.  There are times I really miss him and our inside jokes, his insights into life and his hugs.  Thing Three is an amazing hugger. I truly love the guy.

Here's the important thing: even if, by some twist or quirk of fate, Thing Three came back into my life because we live closer to each other or something like that, the hole wouldn't be filled.  Why?  Because we're older by a couple of decades, because we've both grown in different ways, and because life moves on.  The Thing Three I miss is the Thing Three of my young adulthood - he's still part of my life, but it's not the same.  It will never be the same.

If Bogie (or any of the others) came back into my life in an animated, non-ashen state, they'd slip back into the holes they left.  Thing Three? It will never be filled.

Today, after a difficult week, Bogart (usually referred to as Bogie or Monster) went to the vet for one last visit. He'd had chronic renal failure, which became acute renal failure, complicated by a heart murmur and serious anemia. A friend, writing to see how I was doing, responded to the news with this:


My neighbor..., who has seen many beloved felines leave over the years, always reminds me that cats unlike people don't have goals or aspirations in life; they are not waiting to see a grandchild graduate from college or for a chance to visit the pyramids. Nor do they spend years dreading the idea of death and a final end, because they likely have no concept of a final end. What they want most is the love of their human, and as long as you provide that and they can recognize it, they have a good life. If their death comes surrounded by your love, it is a good death. I chose to believe this, as who really knows what goes on in the minds of cats. All we know for sure is that they continue to go on in our minds, long after they are gone, and I think that after a while that is a lovely thing. 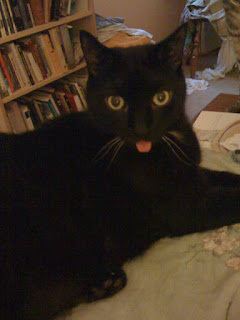 After someone you love so dearly dies, you are absent from the world for a time, living only loss.  The pain of existing without the other is too hard to bear.  Only slowly do you return to life.  To being hungry, not just eating for sustenance.  To pouring a glass of good wine, not just drinking to quench a thirst.  To hearing the words of those around you and answering.