It was like one of those times when you go to the library to check out a reference book for a science paper, but when you get there, you notice there's a new book out by your favorite author, so you check that out instead, leaving without any kind of reference book, and, in fact, you've forgotten all about your science paper because who can think about science when there's a new book out you haven't read.

- Kathryn Fitzmaurice, Destiny, Rewritten
Posted by Lazygal at 08:02 No comments:

(found on Semicolon... saved until I needed blog content)


1. What book (a classic?) do you hate?
I have to go with Ethan Frome.  (if you've heard this rant before, please feel free to skip to the next question).  If you grow up in Upstate NY, in SmallTown, you know about tobogganing.  You know how easily you can go off track.  And you know how impossible an idea it is to commit suicide by toboggan.  I had to read it in 9th grade and I think my entire class was torn between disgust at the plot device and giggles that anyone thought it was possible.

2. To what extent do you judge people by what they read?
Hmmm.... I'm not sure that I do.  I do judge people by if they read.  When I was house-hunting, I actually asked my realtor if anyone read any more, because every place we visited had candles galore but no books!  I don't judge how much you read (or if it's magazines and newspapers over books - Thing One has read maybe 20 books in the 25 years I've known him), but if you don't read? There's probably very little we have in common.

3. What television series would you recommend as the literariest?
Gosh. Not sure what "literariest" means: based on literary novels (in which case, Masterpiece in all its incarnations)? based on books (in which case, add shows like Gossip Girl and Vampire Diaries)?  Intellectually stimulating?  C-SPAN's Book TV.

4. Describe your ideal home library.
I almost have it!  Fireplace - check.  Comfy couch - check.  Floor-to-ceiling bookcases - check. Cats to cuddle with - check.  What's missing?  A mini-kitchen with nibbles and an ever-brewing tea pot.  Not that my kitchen is that far away but this did ask for "ideal".

6. How do you decide what to read next?
Depends.  Right now, I'm reading ARCs in the order of publication... once we head into older Mt. Bookpile territory, I randomly pull books from the shelves and read them.  The problem is that I should read LIFO but tend to read FIFO (what?).

(yes, a change from the IMponderables) RobinSF asks us to ponder "what are the things that will matter to us 90 years from now?" Go and do likewise.
Posted by Lazygal at 07:50 No comments:

Thing One and I have been watching the Shakespeare Uncovered series.  Last night, he asked if I minded a spoiler - about Hamlet (surprise! he dies in the end!!).  Turns out he wanted me to know that Trevor Peacock was in one of the clips.

How can you not love someone like that?
Posted by Lazygal at 07:48 No comments:

I admit it, I'm math challenged.  Thing One says I can't add 2 and 2 without the aid of a calculator (I can, it's 6, right?) As a matter of fact, if you speak French, you'll get why I love this song:


So when I come across something a little odd mathematically, I check with either Thing One or - even better - my father.  Dad helped me pass my Stats class by making up problems and solving them in his head before I'd even written them down.

Yesterday I saw something that had me running for the phone: 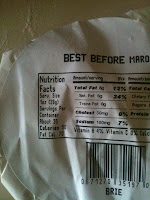 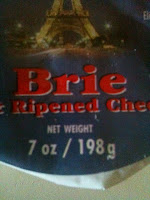 Do you see where I got confused?  How many times should 1oz go into a 7oz package?  Surely it's not 35 times!

And then there's GoodReads, where I've read 50 books toward my goal of 300 for 2013.  There's a challenge you can participate in and it shows you how far you've come.  I saw this today 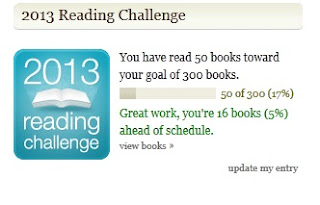 Not feeling the love...

There are a few things that are supposedly certain in our lives: death, taxes and an application for AARP membership when you turn 50.

Having just celebrated the end of my second quarter century, I'm past middle age and heading into early old age. With luck, death is still several decades away. Not only have I paid my 2012 taxes, I've already received my IRS refund. So that leaves the third.

On The Day itself, probably a third of my 390 Facebook friends sent me good wishes. A small, select few joined me at the Bookmarks Lounge to share a toast (or two). One friend brought me a celebratory cupcake, another gave me a gift bag inspired by the French approach to life (macarons, champagne and a copy of this book). There were a few cards and notes in my mailbox.  But the one envelope I expected still, nearly a week later, hasn't arrived.

Perhaps having two lapsed memberships disqualifies me?  You see, half a lifetime ago (literally, half a lifetime ago) Thing One and I worked for an investment bank, Scudder, Stevens & Clark.  SS&C managed the AARP funds, so one perk of employment was membership in AARP.  I confess, I never used it because, well, it seemed a little silly to flash an AARP card when I was not even thirtysomething.  Then, about nine years ago, Thing One hit the Big 5-0 and joined, adding me as his spouse (lucky me).  Again, being in my 40s I never thought of using it, and he let the membership lapse a year or so ago.

Could it be that they're feeling rejected?  Is that why the fated invitation hasn't been issued?

On the other hand, Thing Two got two invitations, one at his post office box and one at his home address.

(for the record, my father says that having an AAA card gives you just about the same benefits, so I'm feeling very Groucho about joining.  it's the thought that counts, tho')
Posted by Lazygal at 10:35 1 comment:

It's not too late to start: Letter Writing Month

Sherri over at Semicolon alerted me to this - letter writing month.  I'm nine days behind, but I have about six letters that I need to write today so I think I can catch up (plus I mailed something on Thursday).

If you want a Lazy Letter, e-mail me with your address.  If I already have it, you have been warned!
Posted by Lazygal at 09:09 No comments:


Dream. What crazy and wild dream would you like to become a reality (or at least begin
to make a reality) in 2013?

I want to start living in a more minimalist fashion.  I've done Project 333, really thought about decluttering my life physically and emotionally, and brought more silence into my life.  So minimalism seems to be the next step, right?

That may - probably does - mean that the Lazyhouse needs to be rethought.  Do I need a space this large?  It also means really be careful with my purchases, continually asking "do I need this, or do I merely want this?" Getting a job elsewhere will mean more of an opportunity to pare my life back to more of the essentials.  Having said that, essentials don't have to be cheap - quality over quantity.

So the dream is to find a job, the crazy and wild part is to divest myself even more of material possessions, keeping only those that really fit my life and make me feel good.  Which leads to how I'll be in 2013: lighter, calmer and bien dans ma peau (as always, the French have le mot juste for everything!)
Posted by Lazygal at 06:33 No comments:

Rubbing me the right way

There are few self-indulgent things I enjoy more than a good massage.  That sense of complete relaxation, the loose-limbed feeling when you're done? Heaven.

I recently had a migraine and was able to survive by having a great head/shoulder massage (something the neurologist recommends highly: get rid of the tension, get rid of the migraine).  Then there was the Breathe Deep Massage at Mohonk Mountain House.  Bliss.  Every masseuse does things differently, and every type of massage differs (hot stone vs shiatsu, for example) and this particular massage did something I've never had done before - she massaged the intercostals.  I've never had my ribs massaged before and it was revelatory.

Lest you think that it's got to be pricey, it doesn't!  There's a great, cheap place in the mall near me, $1/minute.  It's not swanky, no chic furnishings or soft music.  Just plain massage that gets all those kinks and stressed muscles to relax.

If I could, I'd get one every week.

Sadly, Thing One is massage-challenged.  Thing Two tries hard, but just hasn't got the knack.  Thing Three used to give a good one, but I suspect his wife would object... Clearly a new Thing is called for:


Vocabulary. If you could eliminate one word from your brain forever—what would it be?

Years ago a friend said that she (and I) had a speech impediment - she had difficulty saying "no".  Sound familiar?  I'm trying to be better about saying NO to professional obligations that seem like a good thing at the time but are really more about getting kudos rather than personal satisfaction.  Saying NO to the unneeded purchase or gift.  Saying NO to added noise about events and people.

On the other hand, I want to say YES to being with friends and family.  YES to silence.  With any luck, YES to a job opportunity that really excites and challenges me.

As for eliminating a word, there are phrases I know I over use ("what's the word I'm looking for?" and "thingy" are among the worst of my offenses).  It's difficult, but that needs to change! Conversely, there are four I keep trying to add: "I’m sorry. I was wrong. I need help. I don’t know." (via)
Posted by Lazygal at 06:46 No comments: