I can't resist a challenge

Well, Jandy gets her wish... I took the reading test over at Staples and here are the results: 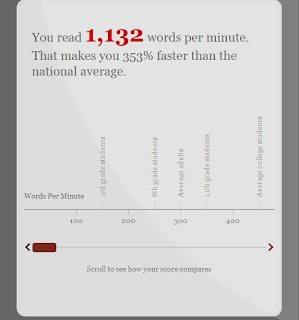 Now, to get an accurate total, I took the test three times and my scores were 586, 1303 and 1132.  It should be noted that the first was from The War of the Worlds (which I've never read), the second was Alice in Wonderland and the third was The Wizard of Oz (both of which I've read often).  The first text had considerably fewer words than the latter two, and since I didn't know what to expect I didn't hit the STOP button the nanosecond I finished.  I'm not sure what to make of this test...

Still, you take the challenge and report back.  Is it accurate?  Is it helpful?
Posted by Lazygal at 13:15 1 comment:

How often do we tell our own life story? How often do we adjust, embellish, make sly cuts? And the longer life goes on, the fewer are those around to challenge our account, to remind us that our life is not our life, merely the story we have told about our life. Told to others, but – mainly – to ourselves.

Julian Barnes, The Sense of an Ending
Posted by Lazygal at 07:34 No comments:

It was my Letter of Convincement to join the Religious Society of Friends (aka Quakers).  Here's what happened:

In 1996 I worked for a Quaker school and every morning we had Meeting, broken into 20 minutes of silence and 20 minutes of announcements/skits/whatever.  As that year drew to a close, I realized that silence was important to me and started attending Meeting in Brooklyn.  Off and on for the next eight years I would sit, silently but in communion with others, listening for that of God within me to speak.  When I left Brooklyn I briefly attended a Meeting near the Cold Cottage from Hell, and then when I moved, I found a small Meeting that really (as we Quakers say) spoke to my condition.

After a few years, I was ready to write my Letter.  What was in it?  Well, if thee were writing thy letter, thee'd talk about your commitment to Friends and Quaker testimonies.  Only thee wouldn't need to use plain speech.  And no, Thing Three, it doesn't contain an Offer They Can't Refuse.  Why is it called a Letter of Convincement?  There are two different types of Quakers: Birthright (those born to Quaker parents) and Convinced (those who are - wait for it - Convinced that Quakerism is the right path for them).

The Clerk asked that members read the letter at the next Meeting for Worship with a Concern for Business, and then a Clearness Committee was formed (note: this is not the same as what Scientology considers "clear"! Clear?)  We met, and talked.  Some Meetings are more conservative and/or Christocentric than mine - for example, those affiliated with Ohio Yearly Meeting or Whittier First Friends Church (home to Richard Nixon) - and there are even evangelical Quakers (I do a great impersonation of one).

Long story short, the Clearness Committee reported to the Meeting at the following Meeting for Worship with a Concern for Business... I was approved... then I signed a Membership Book that dates back - I kid you not - to the 1700s.