Judging a book by its cover

You may (or may not) be interested to know how I choose which books I read and in what order.  It's a really simple system: I get books in, I put them in a pile, I semi-sort them by release date/level of interest, then I pull the top book off the pile and read.  Sometimes I mix it up a little, so that I don't read five dystopian YA novels in a row.  But mostly, that's the system for new books.  Older (Mt. Bookpile pre-2007) books are just pulled off the bookcase in clumps, put in a pile, and then read as I get to them.

I'm down to a mere ten books gotten at ALA, and so for most I don't even remember the cover.  The other day, I pulled Tempest, by Julie Cross off the pile... and promptly screamed "aaarrgh".  Then I took a photo of the cover and complained to Aravis; I then decided to share my dismay with all of you.  Note: this is my reaction to the cover, without having read the book.  My reaction to the book was actually far better! 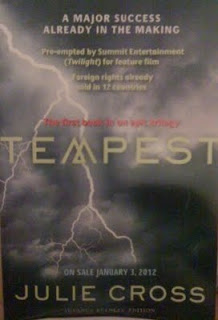 I'm also wondering when I missed the memo that states that 99% of all debut novels are "incandescent" or "luminous".  There are many other words I see mostly in blurbs, rarely in real life, that set me off.  At least I'm not reading limn that often...
Posted by Lazygal at 18:35 2 comments:

The path less spoken of...

Recently I was at a baptism - seven little children joining the Catholic family. The priest spent time explaining each part of the ritual (including the part about exorcism, which apparently has alarmed people who were supposedly raised within the faith). After all the children were anointed, he gave a little speech in which he talked about how we don't really know much about these infants, but that one of them might grow up to be president of the United States... or a great inventor... or someone who finds a cure for disease... or an artist.

Dear readers, here's your opportunity to add to that list.  What path less spoken of do you think we should mention?
Posted by Lazygal at 10:28 2 comments:

15 (or so) years ago I began attending Meeting in Brooklyn. The Meeting is relatively large, and there are usually a few messages each week. For the past six years I've been attending another, much smaller Meeting, but today I back went to Brooklyn for the first time in years.

A few things struck me: on the facing benches were seven people, with probably another 30-40 on the other benches. My current Meeting is lucky to get seven in one week! Brooklyn has heat and electricity, my Meeting does not (well, not in the Meetinghouse, but the First Day School has both). And Brooklyn has people who serve as Greeters, those who close Worship and then a social hour committee - at mine, you do everything on "your" week (and if it's winter, you get there 2-3 hours early so that the wood stoves can warm the place up for others). It was good to be back at Brooklyn, but the outside noise was city noise, while I've become accustomed to country noise.

That led me to thinking about one of the people I follow on Twitter, @robinmsf. She's been live-tweeting Pennsylvania and New England Yearly Meeting, among other things. And BBC Radio 4 has a broadcast called "Sunday Worship". I can't imagine live-tweeting my Meeting - what would one say? - much less broadcast a Meeting for Worship!
Posted by Lazygal at 13:45 No comments:

There are two people, let's call them Partner A and Partner B. They've been together for a long time - let's say over 20 years. Not married, not living together, but definitely a couple, and usually treated as such. For example, when Partner B's family was being honored, A was invited to the celebration. When A's family has events, B gets an invitation (and vice-versa). A is included on B's family e-mail list. Etc. Invitations to a Major A Family Event recently arrived, one to A's home and one to B's. And another invitation to a Major B Family Event came to B's home addressed to "Partner B and Partner A".

So why, after all this time, does an wedding invitation arrive addressed to "Partner A and guest"? I think that means that B isn't invited... or am I wrong?
Posted by Lazygal at 08:44 4 comments:

The past few days have really made me realize how lucky I am in terms of many of the people in my life. Somehow, without quite realizing it, I've ended up with many really great friends and I am truly grateful.

Yesterday I went to see Comedy of Errors at Boscobel. It was suggested by a former colleague/friend - we'd picnic and then see the show. Now, she's not just someone with whom I worked, she's also a member of the "80/84" club, and the mother of two of my students (one of whom is featured in my upcoming webinar). So this wasn't going to be the two of us, it'd be all four. And it was fun seeing her and the boys, as well as another student currently working at HVSF. If someone had asked me last year, I'd have never considered her as someone to spend time outside work with, but I'm so glad I did.

Then today I spent time with my sister-in-books, Aravis. She's helping me rework the Meeting's website* (to be honest, I'm not doing much more than providing login information while she's doing all the heavy lifting). Once again I realized how lucky I am to have her in my life. We talked books, health, school, etc. and then got down to work. All this and I got laptop envy (she has this, which isn't available any more so I got this to replace my dead laptop and soon-to-die desktop). What'd she get out of the bargain? Lunch and a bag'o'books (mostly ARCs). Seems unfair somehow.

And those are only two examples! I've gotten some great phone calls and e-mails from people recently, some with invitations to get together with friends... it's almost enough to make this homebody/lazygal get busy socializing!

Recently, some things have happened that make me wonder what others are thinking.  I'm talking about the presumptions we have about other's thoughts, ideas, motivations, etc. despite evidence to the contrary.

Here's an example: Person A screens their calls, using Caller ID and an answering machine.  Person B calls but the Caller ID shows "out of area" (or "blocked call" or something similar), so Person A doesn't pick up.  Person B then takes umbrage that their call went to voice mail, despite being told by Person A that would happen.  Huh?  If Person B knows that will happen and wants to avoid it, they could e-mail saying they'll call at a specific time, or find some other way of letting Person A know when they're trying to call so that the call will be picked up.

Another example: Person A is holding a party.  Persons B and C aren't on the best terms, so Person A asks Person B if they should invite Person C.   Miss Manners would suggest that Person A invite both B and C, under the assumption that they'll behave because they both like A and they're adults.  Besides, if C finds out that A (with whom they though they had a good relationship) allowed B to make the decision, won't that ruin the A-C connection?

A third example: Person A says "my knees hurt" - Person B shouldn't then decide that A has the exact same problem with their knees that B has.  It could be osteoarthritis, rheumatoid arthritis, a simple strain, or any number of other things.  Telling A that they're treating their knees incorrectly doesn't help A at all.

Or what about Person A loving kabuki, while Person B has no interest whatsoever.  Person A's insistence that B come to shows will only create stress in the relationship.

And finally, Person A suffers a loss or is going through a stress-filled stretch.  They say they really don't want to talk about it - yet Person B insists on calling and talking, while Person C sends funny cards just to say they're there, whenever Person A needs.  Guess which on Person A will finally open up to?

My claim isn't to perfection in this area, but my goal is to get better about presuming that what I need or want or feel in a situation is what others need or want or feel, and to assume that adults can be - and act like - adults (difficult as that may be to believe on a daily basis).  The stress of doing otherwise is mental clutter I just don't need, do you?
Posted by Lazygal at 13:06 No comments: