The past is never really done with, unless you consciously close the door to it with ritual and prayer. Otherwise, it will follow you forever.

Elf Realm: The High Road, Daniel Kirk
Posted by Lazygal at 08:14 No comments:

Not quite brave enough

It's erev Yom Kippur and despite my not being at all a religious Jew (you know, because of the whole being a Quaker now thing), it's a time of reflection. There's a lot whirling around in my lazy little mind - work things, professional things, personal things - and most of all I want to shout Stop. World. I. Want. To. Get. Off. ... or at least have a brief sabbatical.

I've been feeling as though what I need, in lieu of sabbatical, is a good shoulder (or five) to cry on, to moan to, and to pick myself up filled with resolve on how to get things done better/more sanely/more efficiently, bolstered in the knowledge that my BFFs are totally there for me. The problem is, I'm not brave enough to share many of these things with my BFFs. Yep, I know, that's what they're there for but still... I don't even share some of these things with The Boys!

I look at other blogs, like Unwellness and Little Lambs Eat Ivy and DogKat, and think "gosh. very brave. too brave." Some people at MPOW read this blog. Sometimes my parents check in. And then there are all those that I know in real life that read (all five of you - an elite, but important group).

Anyway, if I'm not around as much, that's why. I'm cowering in a corner somewhere.
Posted by Lazygal at 14:57 3 comments:

Recently at MPOW, I received an invoice. Accompanying said invoice was a piece of paper saying that the vendor was, among other things, going green. So, here's what came out of the envelope: 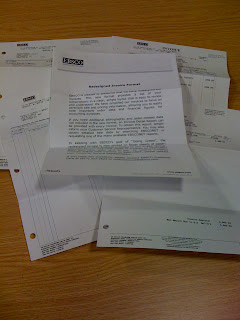 Am I missing something in this whole Going Green thing?
Posted by Lazygal at 08:07 1 comment:

I've known Irene for a year, ever since our wonderful lunch at Millbrook. So how thrilled am I that her book on BFF breakups has been published? Very.

And how upset am I that on my day of resting, I totally missed National Women's Friendship Day? Again, very.

The day is intended to provide an opportunity for women to recognize those friends who play important roles in their lives and to acknowledge how vital female friendships are to women's health and emotional well-being at every stage of life. "Our main goal is to encourage women to recognize the value of female friendship, something that is often taken for granted," says Melanie Schild, Executive Director of Kappa Delta Sorority, the creator of the holiday. "For this tenth anniversary of the day, we encourage women to celebrate the entire month of September."

Whew! I missed the day, but I still have a few days left in the month. Among the ideas that Irene's shared with her readers:

• Plan a girls-only night out, a girls' night in, or weekend getaway
• Meet for brunch or dinner at a favorite restaurant
• Join with friends to participate in a 5K walk or other fundraising event for a good cause
• Organize a book club with female friends and acquaintances
• Reconnect with a friend from the past - Find her on Facebook and make the first call or send a card
• Send your female friends a positive, uplifting message to build their confidence
• Join a girlfriend circle

Best of all, celebrate your female friends!
Posted by Lazygal at 13:15 No comments:

Better Late Than Never (part one)

I should have posted this two days ago, but 98 Days Till the End of the Year is still a healthy chunk of time, right? As Beth suggests,

For the past two years I have done the Goal's Guy 100 Day Challenge which supports you in your finishing up some of those goals... I want you to think of at least one goal you'd like to focus on for the rest of the year. You can make changes to your life.

I've been pondering the ways in which I can change my life in the next 98 days. One of the extra duties I have at MPOW is to be the Monitor on Duty. This requires me to stand in front of the Middle School for about 30min each morning for a week, greeting students as they arrive. We now have a No Talking on the Cell Phone While Driving rule on campus, but more important to the lives of our students is the way in which they're tied electronically to each other and their parents.

What's the connection? Just one post previously, Beth pleaded with us to Enjoy the People You Are With

Today was a gorgeous 74 degree day with a light breeze. The kids and I saw tons of people on our walk.

I also saw something that surprised me. Many of those people were talking on their cell phones completely ignoring the people they were with. Most which looked annoyed. Kids trying to talk to moms who aren't listening. Wives walking besides husbands who are listening to someone else. Husbands being ignored by wives chatting on the phone. Friends walking together, but one of them is talking on the phone.

What if we all resolved to enjoy the people we're with - to really listen to them, to turn off our electronic tethers to other people and be with just one person at a time? If "always" seems to be too much, what about just for the next 98 days? 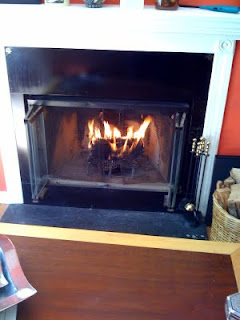 the first fire of the season and... 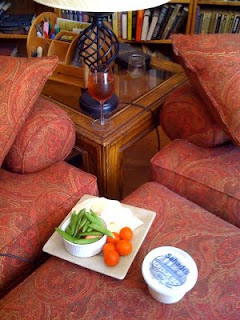 I'll be all set for tonight's Twitter snarkfest!
Posted by Lazygal at 13:23 No comments:

This morning I was watching the news, trying to determine exactly what the weather had in mind so I could dress appropriately. Then a commercial came on - a commercial for Maxwell House ("good to the last drop").

It struck me then that coffee commercials have pretty much disappeared from the tv. I can't remember the last time I heard about Nescafe, Folgers, Chock-Full-O-Nuts, Taster's Choice or any other brand.

Maybe this is a sign of the times: it's cheaper to brew your own than it is to go to Starbucks. Maybe there's something else going on. Whatever, it reminded me of years gone by... in a good way.
Posted by Lazygal at 08:30 1 comment:

For a while over in Facebookland, people were listing the 50 music groups they'd seen live. I've seen no where near that many, but I think my list might qualify as one of the most eclectic:

And next month I'll see Leonard Cohen. Make of that list what you will!

There's been such a fuss over President Obama's speech to schoolchildren later today that I'm hesitant to wade in but... oh what the heck.

The problem I have with the speech is that it's window dressing: hey! look! the President wants you to stay in school!

This window dressing comes at lunchtime here on the Eastern Coast. So, the President wants to interrupt what might be the last good meal kids get until the following morning? And if older students aren't at lunch, they're probably in the middle of their first day of school - another good time to break into the flow of things. Few classrooms have cable access to C-SPAN, and I'm really doubtful that the White House servers can handle the flow of all that streaming video. So let's interrupt everything, herd kids into an auditorium, get them quiet, watch the speech and then get them to what remains of their next class (a process that will take at least as long as the speech itself).

And the kids that started school weeks ago? It's clearly more important to hear the President than it is to continue actually, you know, learning.

The thing is, it's not an important speech. Think about it: today, the President tells you to stay in school - to strive - to want to be something. And tomorrow? Next week? June? Who is going to tell you that? If you're in an environment where school is not valued, where the teachers don't care (and there are plenty of them, believe you me), where the school is failing, what good is the President's speech going to do you???

A second-grader in Detroit may be all puffed up because that guy in the White House actually looks like him. The speech is inspiring and he works his little second grade heart out. But to the HS junior in danger of dropping out? Not so much. One speech is not going to change that life.

I'm not suggesting that this isn't a case of good intentions. It is. Same with Reagan and Bush pere when they gave their Back to School speeches. And I'm not suggesting that it's "indoctrination" or "socialism". It's not. But the execution and timing and lack of follow-through at the micro, school/family level is criminal.

Before we Drop Everything And Listen, let's fix our schools. Let's give those in danger of failing some measure of support and hope.
Posted by Lazygal at 04:45 1 comment:

Not the battle we need to fight

Several people pointed out this article in the NYTimes. In it, the "new, experimental" method of allowing student to choose their own books is highlighted. Nothing new there, and the comment that "Letting students choose their own books, they say, can help to build a lifelong love of reading" should inspire a huge DUH in all readers.

One of the comments I read was "where is the school library?" Really? That's what we're focusing on? Seriously, stop. This "we're the trained book people" has got to end. English teachers are perfectly qualified to help students choose books - at least, I'd hope they are! And who's to say that at these schools, the children don't choose their books from the library? So it's not mentioned. Get over it.

Monica's post about teaching reading sums up what I hope teachers are doing. No one could accuse Monica of not having a good relationship with her librarian (the incredible Fairrosa), or of working in a school that doesn't value the library..

I'm more concerned about Cushing Academy, where the library is being gutted in favor of electronic resources. At MPOW we're moving to more eBooks/databases than before, but the value of print still resonates. Even worse, at CA they don't appear to have librarians (or it's sloppy reporting and no one asked a librarian what they thought of this new phase). As one friend pointed out, they're using free resources, not paid-for databases. Free's good, don't get me wrong, but the implications of only using free is problematic: what if the resource suddenly becomes "pay for"? who assure the accuracy and usefulness of the resource and/or information? And devaluing the library in this way smacks of balancing a budget without thinking about the consequences. I'm also troubled by the statements from the students of using Google and Wikipedia as sources, rather than being taught how to do research and evaluating the information they find.

In short, let's pick our battles more carefully. A school encouraging readers does not necessarily mean it's a school that doesn't believe in libraries - but a school decimating its collection in favor of an internet cafe is to be fought at all costs.

ETA: There's a wonderful post and discussion on the YALSA blog about CA's decision.