But each time I read the story again, I came up against that line in the box at the end:

It was our sad duty to report that Emerson Beale was killed...

It hurt to read that, something inside me ached to over those words. He died, and the story was unfinished. The Postcard, Tony Abbott

Since almost everyone I know has either been tagged or done something similar over at The Reader's Place, I'll let my faithful readers tag themselves.
Posted by Lazygal at 05:14 No comments:

(not so much "overheard" as a conversation I had)

Head of Science walks out of the kitchen with a styrofoam box marked "ICE".

In a dark place

This year I decided not to make resolutions, but to set goals. Less chance of failing and feeling bad because of it, right? The goals are the general ones we all set: to lose weight, to take care of myself better, etc.. I want to have a less cluttered life, so that's a goal. I need to stop feeling so in thrall to my chronic fatigue, so that's a goal.
I'm making headway on some of those, which makes me feel great. Others? I'm not any closer than I was this time last year.

People clutter is one of those areas. There are just some people in my life that are toxic, yet getting rid of them is difficult because I do care about them or because I work with them. For example:
I could go on, but then I'm the gloomy, ungrateful, angry one. I hate feeling like this. I hate not wanting to go to work or to talk with friends because I know that they'll be angry, or negative, or lie to me. I hate knowing what each conversation is going to be like, wondering if I can make it through without saying "SHUT UP" and explaining exactly what they're doing to me emotionally and psychically. I did take one step, a small one, but beyond that... I'm in a dark place.
Posted by Lazygal at 10:26 3 comments:

A few weeks ago, one of my classmates sent out an e-mail (apparently to a select few) touting her joy and support for Barak Obama's candidacy. A week or so later, someone else in my class responded touting her joy and support for Hilary Clinton's candidacy. There were a few more e-mails, including a request for the original Obama mail to be re-sent.

At that point, I sent out an e-mail asking that we STOP this. I know my classmates, and I know that we're not all Democrats. Heck, we're not even all Americans! And, to be honest, I do not share this joy and enthusiasm. In my opinion, the best candidates on both sides have withdrawn, leaving us with the same old choice between who's less incompetent/slightly more qualified/somewhat palatable. I don't want to hear paens extolling this or that candidate: to me, they're all lesser choices.

Did my plea work? Of course not. First there were a few "yes, I agree" e-mails. Then a round of "I totally agree with L[azygal] but let me tell you who I'm excited about"s. ENOUGH already.

So, in my inimitable Take Charge way, I set up a YahooGroup site for my class. I'll occasionally peek in to see what's going on, but I can avoid reading about their politics. Because I just don't care. I get enough at work (where I can't really control the conversation or move it away from me) and amongst my friends I'd rather just steer far, far away from these conversations.

That's why you will not be reading about who I'm voting for, and why. You may get the occasional "don't be a knee-jerk [insert name of party] voter" rant, but beyond that, you're on your own.

Good luck, and may God Bless America.
Posted by Lazygal at 09:30 No comments:

Look! Up in the sky!

Another nail in the coffin

The Kennedy assassination — a defining moment in American history and a never-ending topic of debate among conspiracy theorists — re-entered the spotlight for a moment Monday, after the Dallas district attorney unveiled the contents of a safe that had been secret for more than 40 years.

Was it the contents or the safe that had been secret? I know that the English teachers at MPOW would catch this and have the student correct it. C'mon New York Times -- surely the Grey Lady can do better than this!
Posted by Lazygal at 05:17 1 comment:

Watching Episode One of Homicide

Drinking Water. From the tap.

Reading The Spirit of Chatsworth Mansion, by Alice Scovell Coleman

Viewing Furniture for my living room

Exercising 6 miles in-home walking
Posted by Lazygal at 12:18 No comments:

Heaven? Hell? Somewhere in between?

Yesterday, Thing One and I had a nearly perfect day. The bad part was that Lulu went home, after a month here. The Boys and I miss her, but Thing One missed her more (and her purr and tail shake whenever he was here prove that she missed him far more than she enjoyed being here). So we drove down, listening her her yowl the entire 67-mile drive.

Once she was safely at home, we went to Jack the Horse for brunch. If you're ever in Brooklyn Heights, go there. The food was good, and the ambiance made me feel like this could be a good "local". One caveat: the French Brioche Toast slices are literally the size of a dinner plate. I'm just saying.

After that it was off to the local health food supermarket, then the movies. I really like this theatre, and it played a huge part in convincing Thing One that he wanted to move to Cobble Hill waaay back when we were thinking of moving in together. Another plus is that it's across the street from Sweet Melissa, home of the best granola anywhere.

So, what movie? In Bruges (hence the title of this post). It's now cliche to say that Colin Farrell gives his best performance, but really, whoda thunk he could pull this one off? Yes, he's profane (it is Colin Fucking Farrell, after all) but he's also sweet and tortured and it's just a great piece of acting on his part. That's not to say that the rest of the cast is a bunch of do-nothing pikers, either. Brendan Gleeson gives just as good a performance as Farrell, and Ralph Feinnes turns what could be a caricature into a well-rounded person. Even better, for Thing One, is that Zeljko Ivanek plays a pivotal role (he's one of the Top Five Guys To Look Out For, according to Thing One). Even the violence was manageable, and the language was absolutely funny. I mean, really, was it necessary to have 20 "fucks" in the first couple of minutes? No, it wasn't. But it was funny. After a while, you just don't even notice it. My advice? Go for it. You won't regret the money spent. Really.
Posted by Lazygal at 09:22 No comments:

ETA: This post has been sitting as a draft for over a month!!! High time we closed out 2007, right?

Counting down from last year's 4072 books left to read, I've got 3952 more books enjoy. 379 of them are sitting on Mt. Bookpile as I type! So, what did I do with the books I've read this past year? Well, first, for lists, go here, here, here and here.

For other reading round-ups (and to get ideas for your 2008 reading): 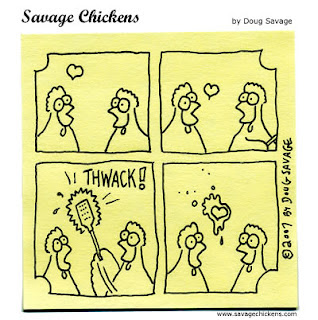 (þ: Savage Chickens)
Posted by Lazygal at 10:41 No comments:

Think before you type!

TV Tattle usually does a great job of summarizing entertainment news. This time, however...

"M*A*S*H" set is being rebuilt at a Malibu park
The Malibu Creek State Park is trying to honor its cinematic past with a partially restored "M*A*S*H" set. The iconic TV series, along with a bunch of movies, used the park as a shooting location for most of the last century.

After trying to figure out how long M*A*S*H had been on the air ("most" of the last century? really??) I clicked on the link. What the piece actually says is that for most of the last century, the park served as a shooting location for the iconic TV series and a bunch of movies.
Posted by Lazygal at 17:31 2 comments: