This is not about my mother, but is a story I heard while on a shuttle bus late last week.  As someone who was raised by a college professor and a retired first grade teacher (if "retired" means "stopped teaching when I came along") I found this absolutely the perfect example of reverse psychology and could not stop giggling.

The radio program asked listeners to call in with their favorite "punishments from mom", obviously "favorite" with several years distance.  A gentleman called in with the following story...

As a junior in high school, he really was not academically inclined and didn't care about grades or learning or all that nonsense.  Cue the result: a poor report card.  Mom saw this and rather than getting upset and giving the whole "you're smart, you can do this, think about your future" lecture she apparently said something to the effect of "I quit", telling him he was wasting his time going to school and his teacher's time in class so she was pulling him out of class.  He was expected to go to the grocery store nearby and get a full-time job, start earning a living as an adult because education wasn't in the cards.

Mom then went out of town to a conference.  Did he go to the grocery store and get that job?  Nope.  He—spoiler alert!!—snuck back into school, crying in the guidance counselor's office that his mother wouldn't let him come to school any more, etc..  When reached, Mom confirmed this while laughing that her nefarious plan had worked.

Perhaps I never needed that clever a punishment.  However, I could see my very clever mother trying something similar... ok, yeah, she did.  But that's a story for another year.  zikhronah livrakha

I've been very upfront about the fact that I'm adopted.  Some people, some families (like Thing One's) hid it, but my parents were told that I should know as early as possible... so they told me when they drove me home from the hospital at five days old.

Anyway, I don't look as though I'm absolutely not related to them (although my sister is a closer match).  With one small exception: my hair. Dad had hair my color, but wavy.  At 86 he hasn't gone completely grey, which partially explains why I have so little grey in my hair! 🤣 Mom, on the other hand had bright red hair.  And a Jewfro.  Family lore says that when I was really young (as in, babe-in-arms young) I got a Raggedy Ann doll and apparently thought it was a doll version of Mom.  My hair?  Stick straight.

To put it politely, Mom was really, really unprepared for hair like mine.  She'd never braided hair, let alone brushed it.  So when my hair got tangled, it was a real pain—and a crisis.  Early on her solution was to just keep my hair short.  Paige cut... shag... bob... all were her hairdos of choice.  But as I got older, I wanted longer hair.

Dad is a scientist, an MIT grad who understands engineering and physics and all that stuff.  After listening to yet another screaming match because there were tangles in my hair and I did not—N.O.T—want to have her tug on my scalp any longer to get them out, he swung into action.  The solution?  Hold a chunk of hair near the scalp, comb out the hair below that chunk, starting at the ends.  Smooth.  Repeat with a new chunk.

So when I read this article in the WSJ, I just had to wonder: Fired from Brushing His Daughter's Hair, a Scientist Uses Math to Detangle the Problem.  My father could have told them the answer nearly sixty years ago. Was any federal grant money involved?  If so, why??  The article says, right there:

Science has found what most parents have learned through trial and tearful error. “You start at the bottom of the hair with a short stroke,” Dr. Rus said. “As you work your way up, the strokes become longer and longer.”

Notice: it's incomplete.  Holding the hair close to the scalp allows for controlling the tension far better.  You can tug on the ends and the scalp doesn't know (aka "a stage hair pull").  And, even more important, why are they brushing tangled hair?  Combs, people, combs!  Unless you like split ends...

Maybe it's a reaction to not being on COVID alert, maybe it's life, maybe it's something else, but I'm not reading as fast as usual.  Only 65 books in four months?  I'm seven books behind goal! Even worse, not one five-star book. Some have come very close, but I don't think I've ever gone this long without at least one.  Is it me?  Is it the state of publishing post-COVID?  Who knows?  Here's hoping for a better few months ahead!

This could have gone with my last post but...

A great number of books have song lyrics as titles.  I'm looking at you, Rainbow Rowell's Carry On and Wayward Son, among many many others.  We decided to do a display of books that provided us with earworms that had nothing to do with the book, but the title sure brought back memories.

We also created a Spotify playlist to acquaint students with the songs we oldies "heard" when we read the title.  Early on, my assistant wanted to include Taylor Swift's Bad Blood while I insisted on Neil Sedaka.

And then there was the book If I Ever Get Out of Here.  On our spreadsheet, it said "Band on the Run" and "Wings".  My assistant, in charge of creating the playlist, had a question: did we want the Wings version, or the "Wings ft Paul McCartney" version?

You can't make this stuff up (or, Kids say and do the darnedest things)

Names have been changed to protect the innocent, in the unlikely event that someone from MPOW is reading my blog and cares.

How did they get up to the third floor in the first place??

I could go on but I'm starting to have flashbacks.
Posted by Lazygal at 13:23 No comments:

I'm a proud old fogey, if you haven't noticed.  I still wear a watch, I prefer to drive a manual, I still have a landline, etc..

So it should be no surprise to anyone that I still watch regular cable tv (it is in color, and it does use a remote: I'm an old fogey, not an unreasonable fogey).  If you're one of those young'uns who streams everything, you may not have run into this thing that networks insert into programs called advertisements (aka ads).  Actual programming has shrunk over the years and the number of ads has increased, but the worst part is some ads get repeated every break... and sometimes twice during a break.

I tend to read or do other things while watching tv, so my attention is not on the ads as much as the company might want.  It's also disconcerting when I hear a song that I've loved in the past — or, to be accurate, a snippet of a song — and have no idea what it's doing in the middle of my tv show break.  If I don't know the song, it usually becomes background noise until the program starts again.

But yesterday I was "watching" and a song got played just about every 10 minutes.  After the fifth or sixth time, I asked Thing One, "are they actually saying 'with every broken bone'?".  He hadn't a clue either.  So I hopped on the interwebs and the googly machine and, well, yep.  It's a song.  By a group I've never heard of before, and the lyrics include "with every broken bone I swear I lived".

First of all, ouch.  And excuse me??  This is part of an ad for a cruise line.  Ok.... so I ever go on a cruise we may not be able to dock or catch COVID (or worse), now I've got to worry about broken bones?  No thank you.

It did remind me of waaaaaay back when I was in college, working a late night theatre tech project with friends and listening to the radio (kinda like streaming music but not really) and a song came on.  It was a hit song, one that confused a few of us until one of my friends suddenly said, "Oh!  It's open arms, not broken arms.  That changes things."  I still don't like the song, but at least I understand the chorus.

Update on my exciting life!

We've all been aware of, if not following intently, the news of the special police actionwar between Russia and Ukraine.  Among the things I've seen in support of Ukraine are t-shirts and posts saying "Slava Ukraini".  Wondering what that meant, I did the librarian thing and googled.  It means "glory to Ukraine".

Whatever happened to him following that no-knock raid?  Firing up the interwebs and that Googly thing, I learned it was less about those expensive cars that we thought he was storing illegally and more about, well, read for yourself.  And, when you're Slava Pride, plus ça change, etc..

I know that's not what she meant but...

Yesterday I went to the doctor and I had the usual experience when checking in.  The registration person always checks my name, birthdate, address, phone and health insurance.  Then she asks:

I know not to take those questions quite as literally as they're asked, because the real intent is to discover if I need a wheelchair and if I feel unsteady.  However...
My last visit was in February, and there was black ice on the ground.  So yes, yes I am afraid of falling.  I'm also afraid of falling down the spiral staircase at MPOW, which has a too-tight turn and too-narrow treads and (if we're being honest) very much out of code.  I'm afraid of falling when I go to feed The Herd and my Big Girl keeps running between my feet.  And I fell last month when I tried to get out of bed and my sheets (jersey material) decided to attack my legs.
Part of me wants to be honest in my answers, because you're supposed to be honest with your doctor about your health concerns.  Something tells me that they'll tell me that these are not the answers they want and to stop wasting their time.
Sigh.
Posted by Lazygal at 08:39 No comments:

The gift that keeps on giving

aka "the building in which I work"

It was built in the late 60s and dedicated in 1971, a celebration(?) of the brutalist school of architecture: all concrete and glass.  Three floors, open plan.  Little wood. And yes, it was planned to be a library.

Is it a surprise that six months after that dedication the Head of School wrote a memo about the "ungodly noise" in the building?  No.  And since my first day seven and a half years ago, I've learned the following:

Usually I don't celebrate or announce my birthday because, well, having a February birthday in Central New York meant a lot of Bad Weather.  Even as I've moved "south" I've had several snow days on The Day and this year we had one the day before.  So it just seemed like a jinx to hope for anything much.  Plus, there's that whole getting older and making a fuss feels silly.

My aunt sent me one of the best birthday comments I've ever received: 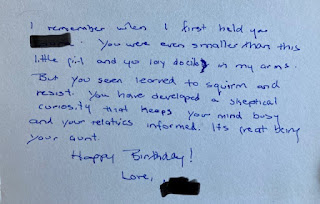 While another friend sent a link to this WaPo article: An ode to those women who say what we’re thinking.  I think all my friends would see themselves in this article, and can relate to my aunt's comments.  At my increasingly advanced age, it feels so good to be seen and appreciated for who I am.

May you feel the same way on your birthday.